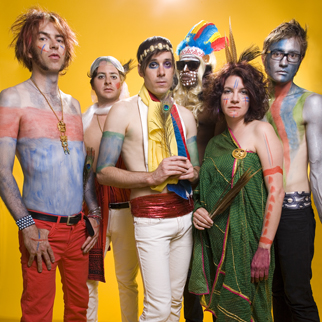 Of Montreal extravaganza at Showbox SoDo

Finally, the fascinating and sometimes disturbing cacophony of OF MONTREAL will bring their sideshow act to the Showbox SoDo on November 19th with HEALTH.

Don't miss this event… previous shows purportedly have consisted of ridiculous amounts of costume changing, a white horse, and liberal amounts of body paint. Kevin Barnes & Co. will not disappoint.

Their mantra, in reference to their new multimedia (that's putting it lightly) release Skeletal Lamping:

The Skeletal Lamping tour is a mind blowing, two-hour plus spectacle complete with over 30 costume and set changes. Pitchfork called it "A variety show on acid,"  while MTV raved, "it takes Of Montreal to bold and exciting new places."

Skeletal Lamping may be bizarre, complicated, and dense, but it's also extremely catchy and packed with slinky grooves that demand a physical response.  Instantly ingratiating hooks abound as Kevin Barnes' compositions constantly mutate and shape-shift in ways that defy conventional pop song structure and album sequencing.  Nevertheless, the record has its own internal logic, and its many tangents and detours feel entirely intuitive and organic in context.  The movements mimic the shapeless, mystifying mingling of thoughts and emotions in the human mind, so even the most deliberately jarring transitions evoke a sudden shift in attention that is recognizable and commonplace, but rarely emulated in mainstream music.

Though of Montreal have never been strangers to expressing sexuality in their music, Skeletal Lamping finds Barnes fully immersed in the topic. Throughout the record, sexuality is presented as a broad continuum encompassing a wide range of experiences, anxieties, emotions and orientations.  Barnes openly explores sex and gender roles without insecurity. He attempts to bring all of his fantasies, and terrors, to the surface, so as to better understand the machinery behind them. In Skeletal Lamping, Barnes argues that identity is fluid, malleable, and limited only by one's imagination.