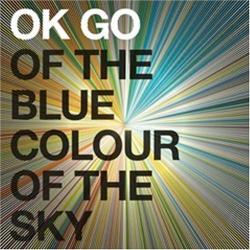 Of the Blue Colour of the Sky

So here’s the story: OK Go won my heart at the (old) Crocodile one night when Damian Kulash awkwardly positioned himself center stage with one leg in a full cast, and proceeded to sing the sweet & funny “It’s Tough to Have a Crush When the Boy Doesn’t Feel the Same Way You Do” at the exact moment I knew that I was going to get dumped by the boy I attended the show with.

After that kismet (and rocking out to the rest of their songs), I made it a point to see them whenever they came to Seattle, which fortunately for me is pretty frequent. I am thrilled I got to see them perform their carefully choreographed “A Million Ways” dance live, even more thrilled when they came up with the “Here It Goes Again” treadmill dance—and have been loving each and every video and song they’ve released since.

The last Chop Suey show ended up with me out of breath and on the floor, clutching an orange tambourine and picking confetti out of my hair. All of this is a long-winded way of telling you that if you think all OK Go does is put out cute videos and make teenage girls swoon, you should reconsider, because not only are their live shows some of the BEST I’ve ever seen, their 2002 self-titled release OK Go and 2005’s Oh No will rock the hell out of you (no lie: every single time I play an OK Go song for someone they say; “Who is this? It’s really good!”), and their newest, Of the Blue Colour of the Sky, is even better.

The band, made up of Damian (lead vocals & guitar), Tim Nordwind (bass & vocals), Dan Knopka (drums) and Andy Ross (keys, guitar & vocals), takes this album from what I like to call ‘pop with a rock-n-roll edge’ to a more effects-laden sound with a little bit of disco. And this is exactly what I love about OK Go: they’re not afraid to take chances, and they change their sound and grow a little bit more with every album.

Starting out with the trippy groove of “WTF?”— also their first video off this album, then moving on to the dance-y and optimistic “This Too Shall Pass” (complete with ooh-ooh-oohs), they hit a more mellow groove with “Skyscrapers” (the intensity with which Damian rasps; “I was blind” over and over nearly brings me to tears). A distinctly Prince-like sound emerges on “White Knuckles”, which is taking the lead as my fave track. “I Want You So Bad I Can’t Breathe” showcases Kulash’s awesome vocal styling (He’s totally talking about me, right? Hey, a girl can dream). And as a companion to that tune, “Last Leaf” is yet another great acoustic song crooned by Damian with expert lovesickness.

Really it’s hard to pick out specific tracks, because as a whole OtBCotS blends seamlessly together into one awesome listen. After just a few songs, I knew that it was going to be one of my go-to albums for private-dance-party-rockin-out-crying-a-little-singing-along-total-music-bliss. My rec: get thee to your favorite local music store and buy it today. You won’t be sorry.