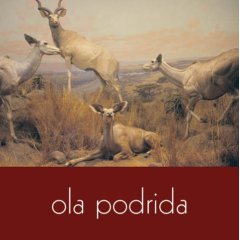 On first listen, Ola Podrida — David Wingo's self-titled solo project — sounds like your typical singer/songwriter album, complete with simple acoustic guitar arrangements backlighting understated vocal lullabies. While it would be easy to throw Ola Podrida into the bottom of a dusty box with the rest of today’s acoustic balladeers, it would be a mistake. Wingo’s background as a film composer (George Washington, All the Real Girls) gives the album an underlying emotional quality; not one that is stuffed through your ears, but rather presented softly in quiet brushstrokes.

In fact, the themes of the record are presently quite cinematically. Instead of telling you how he feels, Wingo gives you a lush, image-rich situation and allows you to digest it anyway you like.

"Jordanna" is a subtle yet extremely moving track about love and loss, one that could easily creep through your head while you’re drinking alone. "Lost and Found" is a lively song that helps to give the album much needed energy. Wingo’s clumsy vocals work well over the driving tempo.

"Cindy" is a raucous track, complete with thumping drums and overdriven guitars, one that brings the album out of its blissful coma. This track is one of the album’s strongest, one that allows Wingo to embrace his full musical abilities instead of stripping them down into wistful ballads. It’s a stark difference from the overly monotonous and emo-drenched piano ballad "Pour Me Another," which is an example of Wingo getting swept up in the singer/songwriter cookie cutter. "Photobooth" reeks of Iron and Wine, but works thanks to the graceful vocal harmonies and reflective guitar melody.

Wingo has a gift of crafting well-phrased yarns and setting them to spot-on on musical arrangements. While there are times when you’ll think your listening to a Sufjan Stevens album; there are others in which this record is completely Ola Podrida.