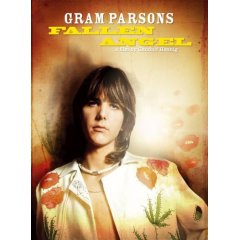 The founder of the Flying Burrito Brothers, Parsons was a millionaire kid who created out of a playful passion for Americana (before it was known as such), and for which he took a lot of shit from both kickers and rockers. He died tragically and stupidly from an overdose near his beloved Joshua Tree monument in California, and the absurd misadventure regarding his corpse would be compelling enough (an interview with the primary person responsible, road manager Phil Kaufman, is torridly in-denial of the situation).

Parsons’ own lack of real success might make those unaware of the spiritual pain and loveliness in his songwriting and singing wonder why they should watch this. I never owned an album of his before viewing "Fallen Angel" (though I was familiar with the versions of his songs covered by Elvis Costello, Violent Femmes, and many others), and I quickly corrected that lapse in my own record collection. Very similar to the Tim Buckley documentary in terms of its humble and informative pacing, abundance of talking heads, and plain chronological narrative structure, a casual viewer of this story of the life of country-rock pioneer Gram Parsons may miss the fact that the interview segments (including Keith Richards, Peter Buck, and Pamela des Barres) are so first-rate. Besides turning me on to great music, though, Keith Richards’ descriptions of Parsons’ insecurity and feelings of being unloved by his family broke my heart. Directed by Gandulf Hannig.

{buy it on Amazon}