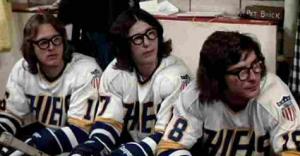 It seems entirely fitting to get "Old Tyme Hardcore" on today's iPod Roulette. You see, Slapshot is a classic Boston hardcore band, they sample a classic sports movie (and source of their name), and this song one of the greatest victory songs of my lifetime. I have listened to this song about ten thousand million times — whenever I need to work up a good, aggressive lather before a soccer game, whiffle ball game, or bar fight.

The song itself clocks in at something like 1:30 (not counting the excellent Slapshot clip). It, to me, epitomizes the Boston hardcore attitude, a sort of scrappy/underdog attitude that is interwoven with the working class attitude of (classic) Boston. Nowadays, we get bands like the Dropkick Murphys bringing a facsimile of this attitude, showing up at Fenway more times than I like to remember (but hey, I'll take them over the horrific appearance of Smash Mouth at the 1999 All Star Game) and the gentrification of the Boston region has utterly changed many of my favorite spots. Gone are most of the hole-in-the-wall record stores, gone is the "Wursthaus" (the darkest, dingiest restaurant in Cambridge) in Harvard Square, replace with an Abercrombie & Fitch (and now a bank), gone are most of the punks that gathered around the Out of Town News (well, mostly gone). This just might just be misguided nostalgia for "the ways things were," but hey, the city has changed.

Of course, right now the city of Boston is the center of the sports universe, with the Red Sox dispatching the Rockies in the first two games of World Series, the Patriots looking indestructible, the BC Eagles threatening to win a National Championship, the Celtics looking like they might actually win a game. This is jarring, in a sense, for a kid who grew up in New England. We got used to being the region that had teams that came close but never won (if you ignore the Celtics of the 50's and 80's). And now, we're the city that doesn't lose (well, at least not right now). So when I heard "Old Tyme Hardcore," it almost makes me sad to think that something of the scrappiness, the dinginess of Boston has gone away. Maybe it is a good thing that Old Tyme Hardcore was Slapshot's swansong because I think think they'd recognize the city nowadays.

Don't get me wrong, I love the streak we're on, but it was fun to be the underdog.