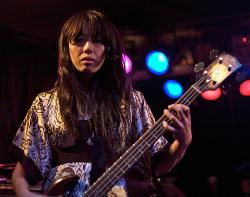 First up was Coliseum. We didn't see too much of them because they went on first, but the whole band was super tight and the music was pretty powerful, physically — more punk than metal and the drummer put his whole heart and soul into what he was doing, to the point of standing up to beat the hell out of his kit. I think a lot of people bought CD's.

Next was Panther, from New York. Panther played classic heavy/speed metal with heavy drums and hard bass lines. The vocals were reminiscent of a low-register Black Sabbath. The drumming was solid and the whole effect made me think they would be perfect for Guitar Hero… but a weird pairing with Mono. The band seemed like they were having fun up there; they had loads of energy and even exchanged a few smiles (SO not metal) with one another on stage. Later in the set, the vocalist seemed to be channeling Danzig and didn't seem to mind that the crowd wasn't too thick. I admired Panther for their dedication. Random overheard quote: "They're good at what they do, I just don't like what they do."

Mono began tuning and the crowd noise fell to a hush. They started out with a really slow, mellow bit but I knew they're just about to let us have it, and the crowd was rapt with anticipation. Gradually the band eased into a more tonal, hard-fi sound, building slowly but steadily… and then there it was, that characteristic guitar swell. It sounded like someone playing at the other end of a tunnel, then nothing… and then EVERYTHING. There was the sonic boom, the wall of sound, the white noise. The lead guitar had its own voice and almost told a story.

The joint was packed and more people were pouring in. As per usual, Mono was super-stoic when they played. The music was organic and didn't seem to come from a dark place, even though it definitely had dark moments. I was with a couple of folks who hadn't seen them before and their reaction was priceless: "I think I just came in my pants!"

The show continued this way for what seemed like a very long time, but it still wasn't long enough. Mono brought the wall and then broke it back down with an almost zen-like calm. Their level of brain blackout was just amazing. It's hard to say which songs the band played, or what album these songs were from, as there's not much point of reference with instrumental music, especially not a collection as large as theirs. But the show gave me exactly what I wanted — I felt pinned to the wall, my body and clothes vibrating at times with an overwhelming feeling that everything was going to be all right.

It's gotta be hard to follow Mono, but High on Fire did their best. The crowd seems to be pumped, but their sound was a shock after Mono. The shirtless guitarist/vocalist said, "I don't want anybody leaving here without fucking tinnitus!" The music featured lots of guttural, deep-throat screaming with heavy, fast double-bass infused drumming, and each song was more of the same. The music did nothing for me, personally, and the audience seemed either transfixed or confused, I couldn't tell which. As the singer spit in the air, it was like some kind of bizarre psychological torture that set my teeth on edge, and I couldn't stop twitching. People were leaving in droves and we followed suit…