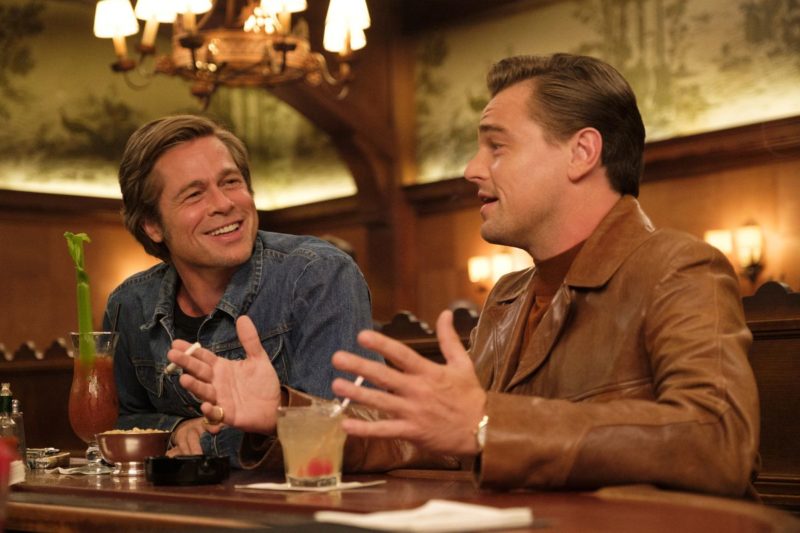 Once Upon a Time in Hollywood

Once Upon a Time in Hollywood, it’s 1969, and actor Rick Dalton (Leo DiCaprio), a former television Western star, is struggling to maintain his celebrity status while his companion, longtime Dalton stunt double Cliff Booth (Brad Pitt), is struggling to find work. The two men are becoming industry relics as the 60s close — Cliff doing his best to boost Rick’s confidence when he can; Rick providing Cliff with odd jobs to help him out with enough cash to live.

While Rick is on set doing guest appearances, Cliff has plenty of time on his hands and spends most of his days cruising around the city streets in Rick’s car. After a few flirty encounters with a pretty, young hitchhiker, she invites him to come and meet her “family,” who is staying at a broken down former shooting locations called Spahn Ranch.

Next to Rick’s home on Cielo Drive, Sharon Tate (Margot Robbie) and her husband Roman Polanski have just moved in. Rick comments that all he needs is an opportunity to meet his neighbors, and he could possibly star in the next Rosemary’s Baby.

We see Sharon laughing with her friends, attending a party at the Playboy Mansion, and sheepishly asking if she can get into a screening of The Wrecking Crew for free, since she’s in it [Dear reader, THIS was actually my favorite part of the movie]. Settling into her seat, she puts her feet* up and revels in the crowd’s reaction to her character on screen.

As we move through the everyday lives of these three characters, the suspense builds and, already knowing the story of what happened IRL, the audience waits nervously for all the threads to come together.

But forget everything you were expecting from Once Upon a Time in Hollywood: Charles Manson barely appears in the film, and though his cult family plays a much larger part, they’re not the stars here. Neither is Sharon Tate, or Roman Polanksi — and really, even though they center stage, are Rick and Cliff.

The clear star of Quentin Tarantino’s ninth film is Hollywood.

You can see it in the way he lovingly pulls the camera across the streets; the houses; the hills; the neon signs; the iconic restaurants; QT fucking LOVES Hollywood, and he loves it in a way that’s exhaustive, breathtaking, powerful, and fascinating. Hollywood exists in this film as a fairy tale wonderland — one that’s changing rapidly, but still contains most of its magic.

You can also see it in the way he carefully constructed the characters of Rick: an actor aging out of lead roles and into secondary “heavys,” and his BFF Cliff: a stunt man who can’t get work anymore based on not only his age, but also on his attitude (and a persistent belief that he killed his wife).

And you can even seen it in the way Tate orbits these two men: It’s true that Margot doesn’t have many lines, but she’s able to emote SO much with her face that it doesn’t really matter. The spirit of Sharon Tate is there, and you can see every single emotion of what she’s feeling play out in her eyes. Robbie is just that goddamn good.

As for the Manson Family, who are mostly played for laughs — which was, honestly, strange, hilarious, and disconcerting all at the same time — you can see it there too; in the way they represent change, and uncertainty – and of course, malice.

That’s not to say that even though I’m a devoted Quentin Tarantino fan and recognize that this film is really fucking beautiful, and (mostly) really fucking funny, I didn’t find faults with it. The inconsistent narration seemed out of place, I was not into seeing an extra long cut of violence visited upon two females — two villains sure, but as a woman, I still winced a lot during it; see also The Hateful Eight — and there was a little too much *wink-wink *nudge-nudge* happening for me throughout.

I still think it’s a good film; it’s just not a great one. Future viewings may move the needle more one way than the other, but we’ll see. Do you love Tarantino? Filmmaking? The history of Hollywood? The 60s? Cameos galore? Yes? Well then, go forth my friends, and see this. You’ll probably love it.

*HONESTLY between the extended pan across Robbie’s feet in the theater and Margaret Qualley’s dirty feet pressed up against a car window, I gotta believe Tarantino is just trolling us now.