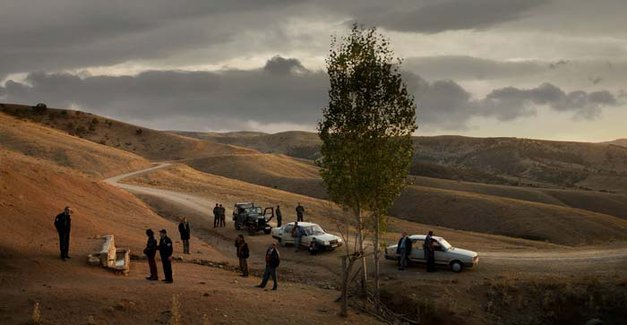 Once Upon a Time in Anatolia

{Once Upon a Time in Anatolia opens in Seattle at the Northwest Film Forum on Friday, April 6th, and runs through April 12th}

Hey guys, I highly recommend checking out Once Upon a Time in Anatolia. It's long, slow, cryptic to the point of confusing, and stuffed to the brim with symbolism and an array of characters suffering opaque yet significant life regrets. Oh, and it's in Turkish. Hey wait, come back! It's also really really good. Filled with beyond beautiful visuals, humor and insight (even if you argue the theme of "whenever there's trouble look for a woman" dialog). Sure … maybe I've not yet 100% worked out everything that was going on over the course of the film. But I want to understand it. To the point where I'm likely going to watch it through again this week when it makes its Seattle appearance at the Northwest Film Forum. A film that captures my attention and makes me want to be a wiser viewer deserves to be seen.

The burnt copper/sepia palette combined with breathtaking held closeups of the story's murderer alone make for a super memorable watch. Just maybe don't check it out when you're tired. The Bourne Identity for ADD suffers it's not. Some folks may hate me later for this recommendation, but I think this is the real deal.

The film opens with a group of three cars filled with men looking to find a corpse. In tow are the confessed murderer, the local prosecutor and police, gendarmes, and a doctor. It's late at night and the killer's memory is shaky as to where the victim has been left. Due to a combination of the undifferentiated countryside and a fair amount of alcohol. We're given zero context as the group troop from one location to another. That the film takes its time with this part is a severe understatement as the men pass the time with a mix of frustration, humor, and discussion of a surprisingly wide range of topics. It may be 90 minutes before you feel like something has happened. But it's still engaging, even if the mind naturally starts to wonder where this is all going.

None of these characters are young and it's clear from each face that all house life regrets. Who they are, what they're doing and how it impacts the choices they make are gradually revealed by their actions. It's a crime story, but at the same time it's both less and more than that. Little is spelled out, and it's easy to forget you're watching a movie at times, the dark, dark fairytale grip of the environment can be so strong. Even dialog was completely muted (which would be a crime itself) the visuals would fascinate. Combining fixed camera wide shots with intrusively staring closeups the cinematography is part of the tale. In a night-scape illuminated by the moon and vehicle headlights we're forced to see the Anatolia landscape as a character itself. Whether you spend your time analyzing recurrent visual themes of bright spots in the night or not it's hard not to be gripped by the striking look that's achieved onscreen.

Before this, I'd only seen director Nuri Bilge Ceylan last film, the bleak, similarly colored Three Monkeys. There are echoes of that here but I appreciated Once Upon a Time in Anatolia much more, both visually and story wise. Especially in the spoken (and unspoken) interplay between the host of men, none of whom we may fully know by film's end. Not that I entirely disliked the earlier effort. It just feels in so many ways that he's playing at a whole other level now. I'll certainly look forward to future films from Ceylan and in particular anything else shot by his cinematographer Gökhan Tiryaki.