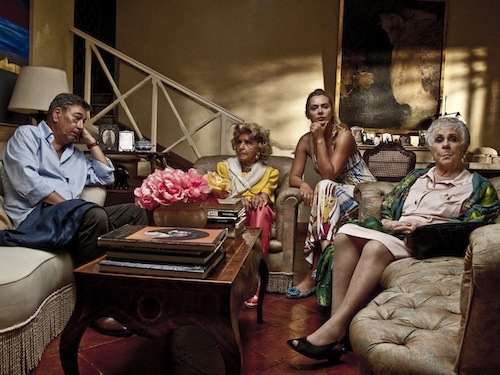 {The Salt of Life opens in Seattle on Friday, 4/6 and is screening at the Seven Gables Theatre for one week only}

I absolutely adored Mid-August Lunch by Director-Actor-Writer Gianni Di Gregorio, so I was really excited to view his latest film: The Salt of Life.

Gianni once again portrays a warm, generous character—who suffers from comedic circumstances that he constantly struggles with. His “Mama” (played by the amazing Valeria de Franciscis) is spending his inheritance on her lavish house, extravagant ladies’ lunches, expensive landscaping, and bottles of $250 champagne. Even though he’s struggling with his own expenses, he can’t ask her for money outright—instead relying on the fact that he will eventually inherit her house and whatever is left of her fortune.

His home life has suffered from routine, with a wife that seems indifferent to his distress and a daughter who insists on keeping her unwanted boyfriend around the house because she’s too busy to break up with him. Gianni’s preoccupation with aging is compounded by the fact that his beautiful young neighbor accepts his offer to walk her dog and run errands, but is seemingly oblivious to the fact that he’s an attractive man.

After noticing that men much older than him are hooking up with neighborhood hotties, Gianni makes several attempts to attract younger women. Failed tries with his mother’s caretaker, an old flame, and one of his mother’s friend’s daughters all end in frustration, as Gianni is friend-zoned before he can convince any of them to be his mistress.

It’s a short, sweet, pretty little movie with lots of Italian eye-candy, amazing Trastevere scenery, and an unexpected segue way into a montage featuring the Pixies “Here Comes Your Man.”

So basically, the perfect movie for a weekend afternoon filled with laughing—followed up, of course, with a couple bottles of wine and some kick-ass pasta.