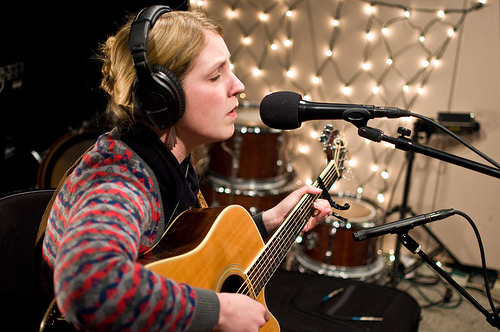 One more choice for the weekend: Zoe Muth (and a host of friends) at Columbia City Theater {1/14}

If you were tuned in to KEXP this past Wednesday night, you heard the mega-dreamy twang-bliss that was none other than Zoe Muth, performing a solo set on the Roadhouse sans her Lost High Rollers. She did four songs (three new) and an interview with Greg Vandy, which is all archived in the bellows of KEXP's website — and if you dug it, you're in luck because you've got exactly 1.15 chances to see her perform this weekend in town.

Chance 0.15 is that there's still tickets available for the Triple Door performance taking place tonight, as last we heard it was down to Standing Room Only — but the other end of the spectrum is the fully available ticket you can buy for the show going on at Columbia City Theater Saturday night: Zoe Muth, Kaylee Cole and a host of others will be swooning the room away with a Honky Tonk Angels tribute night, trading off lead spots with backing by the ever-competent Side Saddle. Yes, it's country — but trust when we tell you it's the good kind. Promise.