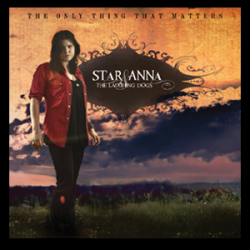 The Only Thing That Matters

“And I just want to burn your memory away, every impression you made,” Star Anna sings on her second album on midway stormer “Burn,” like a woman torching a bridge between past loves held too closely and a future in which she can survive. She and her Laughing Dogs came from Ellensburg in 2008, and they sound like they sang basement blues and practiced garage chops till they perfected a roots-rock feel as heated and homespun as Lone Justice, Jason & the Nashville Scorchers, and up to anything you’ll hear from the big shows in Ballard.

I was unable to check out their first album (Crooked Path, 2008) but I’ll need to hire a detective to help me track it down and soak in every thought and sound as I have with this one, if it’s anything near as lyrically raw (“If I drink enough I won’t remember your name / and I’m too drunk to feel, too drunk to be seen /Just sitting here spinning my wheels” from “Sleep My Darlin'”), wisely anthemic (“Hawks”: “sifting through garbage till we find the truth”), or spit-handed and sweat-browed played (most of the record is as surprised at its own handle on C&W/rock crossover, as if it was recorded during the initial stampede in the late 60s/early 70s). Brad Zeffren’s production is as loud and soft as the band does it, and we never miss a great lyric even beneath a peel from Justin Davis’s guitar, a surging two-step lock from bass player Keith Ash, or a cracking slam from drummer Travis Yost.

Best of all, the lack of cliches here (unlike this here review, partner) even when handling well worn topics is remarkable. She’s getting very near Carolyn Marks territory for a good story, too. I know, there’s currently a state full of ghost towns of Americana bands dipping into the kerosine heartbreak these days, but almost every song on The Only Thing That Matters comes from a different emotional spectrum, whether seductive like opener “Sleep My Darlin'” or the tender and tense epilogue “Tripping Wire.” Star Anna’s already being compared to Lucinda Williams for emotion, wit, and passion, and if you’re up on the genre at all, you know that’s extremely high praise.

I hate to hype something so hard for a sophomore release from a young band, but (for example) the meaning-of-life lyrics of “Hawks” are so keenly matched to the urgent pure pop of the tune I can’t imagine it not becoming a licensing miracle for a film (that won’t need to be indie). That quality is throughout, and next time out I think we’re even going to find out more about Star Anna, as her writing continues to grow and the band refuses to slump. I’d bet detective money on it.