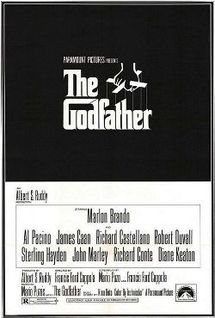 "Only don't tell me you're innocent. Because it insults my intelligence and makes me very angry." The Godfather at SIFF Cinema

Leaving aside any bad "offer you cannot refuse" jokes, this is quite exciting.

The fine, benevolent people at SIFF Cinema understand that the holiday season is all about spending time with family. So, they have programmed several nights with film's most well-known family, the Corleones.

The Godfather and its sequel truly are two of the greatest films ever made, so this is a treat to get to see these two films on a big screen, with a new 35 mm restored print. For the film purists, I was told that the somewhat recent screenings of The Godfather were shown in DVD format but SIFF will be showing both films in film.

While there is so much to love in both films, this is my favorite conversation in a film, from the first Godfather, between Michael and Kay (Al Pacino and Diane Keaton):

Michael: My father is no different than any powerful man, any man with power, like a president or senator.

Kay: Do you know how naive you sound, Michael? Presidents and senators don't have people killed.

Michael: Oh, who's being naive, Kay?

The full schedule and ticket info can be found here at SIFF's website.