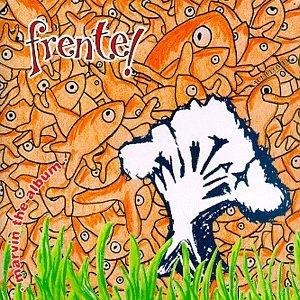 I have to be honest: I forgot that I was spinning today, and it was only after I'd had music on for half an hour that I remembered. So this is not authentically the first song that played this morning; however, it is the first song that came on when I stopped and re-started.

frenté! (this song being from the era of the exclamation point, which they later dropped) was a huge part of my teenage music experience. However, I think they became so a few years AFTER Marvin! The Album was released — it came out in 1992 and only received a smidge of stateside attention (they had a bit of an MTV hit with their cover of "Bizarre Love Triangle," which is so, well, bizarre considering they had better songs of their own). Then somehow around my senior year of high school ('95-'96), me and my friends resuscitated and rocked out to ol' Marvin. I remember trading for the album — I gave Reece Spinney something, I don't remember what, and she gave me Frenté!. I think I got the better end of that deal. I remember Christy Bluhm would play "Labour of Love," arguably frenté's best song, while we all harmonized on the vocals. We were belated superfans.

I also fondly remember "Ordinary Angels" as one of the tracks that I would sing and dance along to in my room with the door locked. Also in this category are "Dangerous" and "Accidently [sic] Kelly Street" from the same album, and "Horrible," the only song I liked from the follow-up, Shape, released post-exclamation point — as well as hits from other hot favorites of the day including "Sixteen" by this hot new ska band with a platinum-ponytailed lead singer, and "Who Will Save Your Soul" by some weirdo Alaskan hippie chick. Ah, the '90s.

"Ordinary Angels" is fun. Dig it up and have a listen. I just found an acoustic, slower version of it on their MySpace.