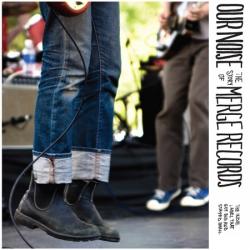 Our Noise: The Story Of Merge Records to be released September 22nd

Warning: This is an ecstatic early plug for the upcoming fan-dream book, Our Noise: The Story of Merge Records, the Indie Label that Got Big and Stayed Small.

As Magnet magazine is quoted, “[Merge] might be responsible for more indie-rock classics than any other label in the past two decades.” David Byrne considers their survival “kind of amazing these days.” NPR asserts they’re “one of the top independent labels in the world.” In Our Noise author John Cook shows the letter that Glitterhouse sent to Mac McCaughan and Laura Ballance (in Superchunk, of course, and who started the label) originally sent turning down European distribution (it’s hilarious, considering what Merge would achieve); to the later days when Mac feels giddy and weird hanging out near Dr. Dre and Springsteen at Coachella.

All I know is that where stacks of my favorite records have drifted into corners of my apartment, there are piles that specifically look like a shuffled Merge release history. Superchunk, Neutral Milk Hotel, Magnetic Fields, Spoon, and so many others are endlessly downloaded into my iPod, drunkenly grabbed on melancholy work nights, and burned into mix CDs for comrades that I need them close by whenever.

And now there’s a luscious fat trade paperback tribute book from Algonquin that has a ton of art, photos, obscure record covers, scraps of visual history, and a lot of really cool and funny anecdotes and observations of the label throughout its two decade lifetime. Chapters include “Death Chick and The Cave Man: 1987-1989,” “Signals That Sound In The Dark: Neutral Milk Hotel,” “The Book of Love: Stephin Merritt and the Magnetic Fields,” “The Decline of Country and Western Civilization: Lambchop,” all kicked off by an outrageous drool-intro by Ryan Adams.

Label fan books have been declining since print has been “dying,” though Brian J. Barr recently left his position as music editor at the Seattle Weekly to scribe one for Sub Pop (!), though high quality ones have never been ubiquitous in the first place. Cook, who is a reporter with Gawker Media, is a lucky man, who had a truly legendary label to chronicle, and his editing of oral histories from excellent convesationalists involved with or on the label is superb.

Which raises the question, what label would you like to write and/or design an extensive fan book for?