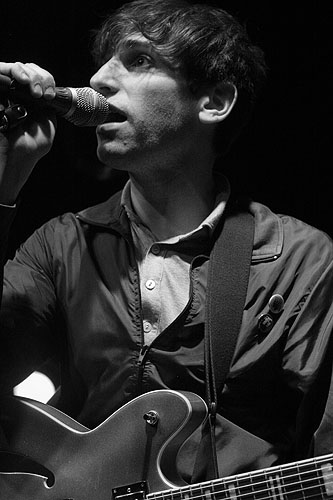 Pains of Being Pure at Heart woo The Crocodile

The Pains of Being Pure at Heart played a sold-out show to promote new album Belong at The Crocodile last Friday, with many of the Imaginary crowd eagerly in attendance.  Offering a welcome retreat from the Sakura-Con crowds, the show also heralded in the spring concert season that I have long been anticipating.

The Pains are led by Kip Berman on vox, with the muted Peggy Wang on keyboards, Alex Naidus on bass, Kurt Feldman on guitar, and Christoph Hochheim rounding things out as their touring guitarist – and as this is their third Seattle show in as many years, it’s safe to say I think they like us!

Seattle’s Seapony set the tone for the night – if you missed them, you can catch them Saturday, May 7th at Chop Suey. Oddly, the audience numbers dropped a little after the departure of the raucous-by-comparison Twin Shadow, but POBPAH took the stage with subdued enthusiasm, unfurling “Belong” as their declaration of intent.  “Teenager in Love” was a dream to experience, but I wish the sound quality had been a little clearer – the gloriously dark lyrics mostly faded into muttering amid the amped up guitars.

Interaction with the audience was sparse, but did allow for some wry humour; my favourite moment had Berman asking the crowd “Is my friend Mike here?  No?  Well, I was going to dedicate this song to him, but he’s not here…I guess I still can…because he’s my terrible friend!”.  Likewise, this was not a concert to thrash about to, and at times it seemed more fitting to be cross-legged under a willow tree with a hot cuppa (Do POBPAH sell thermoses or teasets?  I sense a niche in the merch stand!) than shuffling to-and-fro amid the humid belly of The Crocodile.  The music of POBPAH is cardigan-clad, awkward, and unapologetically poppy – but who cares?  This love is fucking right.

Like what you see?  Check out more photos at the TIG flickr pool, make sure you didn’t miss Chris Estey’s review of Belong, and add some sparkle to your day.