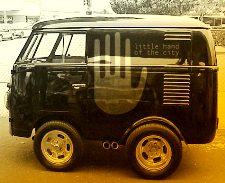 Little Hand of the City, The Pale, The Senate Arcade

The evening started low-key enough. A last minute decision to treat ourselves turned into a Tuesday night show of unknowns and known favorites. A band that had recently crossed our radar, Little Hand of the City was opening up for imaginary heartthrobs, The Senate Arcade and The Pale.

I found out about Little Hand of the City {LHotC} when I started at my new job. LHotC singer / guitarist Aaron Mannino apparently mentioned this imaginary website to my boss, who in turn passed along informative LHotC words to me. In typical Seattle fashion, I followed up with internet research and was pleased with the mp3s on their site.

And when we discovered that they were on the bill with The Senate Arcade AND The Pale… it was a no-brainer. New music PLUS two bands we've been jones-ing to see for a while? We were there.

Although the LHotC set was short, I think got a great feel for their pop rock tinged with Seattle grunge sound regardless. I am excited to hear the EP they mentioned they've been recording.

Lead singer Aaron had the onstage presence of a Rhett Miller Jr. He was polished, fearless, and wiley on the guitar and vocals, without a stitch of nervousness about him.

When I spoke to him after the show, I found out that the band name was derived from the last names of the founding members: Aaron Mannino and brothers Mark and Dan DeJoy {DeJoy was originally DiGioa}. When their last names are combined {Mannino DiGioa} and translated from Italian {Mannino = Little Hand, DiGioa = Of the city, Gioa}, you get "Little Hand of the City, Gioa". They shortened it to Little Hand of the City and haven't looked back.

I love a good naming convention, but up until five minutes ago I kept referring to them as Little Hands of the City. And it's such a mouthful. I think they should rename themselves something like… Triple Word Score! Or Yatzee! Or Sillie Nelson would be fun.

I think The Murky Dismals is brilliant. But LHotC isn't even close to murky or dismal or even solemn. Maybe they should make up a grouping of words, like Waxtry, or MasterFlaker, or w.w.h.d. {What Would Hedwig Do?}.

Me too, though it might be tied with Triple Word Score! We can leave that name for another band to use. But from here on out, let's call LHoTC BNB. Is that so wrong? I wonder if they could capitalize on the B&B {bed and breakfast} imagery associated with the acronym of their new name.

Ah, the t-shirts! I could see an illustration of a New England style house… I'd even let them put "Little Hand of the City" on the doormat. Speaking of good-looking and well-designed, The Senate Arcade followed BNB on the bill.

The Senate Arcade has that Sparta spark with a Helmet hangover. Unlike their metaphorical brethren, I find their brand of concussion soothing. Each song is a constant wave of mutilation. Hooky variations meld together to make the Senate Arcade rapids oddly calming.

They calm you? I think The Senate Arcade need warnings listed on their CD packaging "Do not listen to while in rush hour traffic" because Todd Schlosser's wailing vocals layered atop that driving guitar layered atop Matt Terrich's screaming in the background makes me want to rear-end the fucker that's talking on his cell phone on 520. I promise you I'd be smiling the entire time I did it!

Dude, you're marshing my mellow.

Oh… whew… {deep breath}. I just mean that they are intense so I get intense.

In my favorite Senate Arcade song, Todd screams Stealing your thoughts! As they began the song this evening, I leaned over to tell igLiz something just as Todd screeched "Stealing your words!" I looked around the crowd realized that he had essentially done that. No one in the crowd was having a conversation while TSA were playing. Not only because everyone was watching the show, but also because the guitars, drums, and vocals filled every inch of the room. TSA leave no room to conjure your own words.

I was speechless because it was likely the most sedate I had been all week. What a perfect state of mind to greet a Pale set!

The Pale write songs that are so smart and coy, they are themes for the valedictorian boy next door. They are swift with their hooks and render the audience defenseless with the one-two punch of Gabe Archer's lullaby-esque vocals and whimsical keyboard. They make music that is sweet and charming while remaining quite reminiscent of early 80's U2.

And tonight we learned that they are going to begin recording their next record in November!

I always have just two questions when I watch the Pale perform: Why haven't these boys made it big yet, and is it possible to fall in puppy love with four people at the same time?

Answer: Good things come in time, and I am certain it is going to happen to these hardworking fellows soon… and yes, it is possible and totally understandable to fall in puppy love with the four sweets in the Pale.

Whew, then all is far and right in the world.

Oh, and one more question {applicable to this show only though}… Did you see Gabe's "Say yes to Michigan" shirt?!! A man after my own heart. "SAY YES TO MICHIGAN!"

Are you back to being "intense" again?

Nah, it is just the combination of the Pale, Michigan, and saying "YES" gets me all excited.