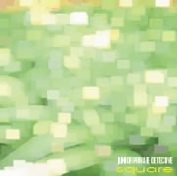 Band press packages run the gamut, from absurdist to informative. If the band and/or their publicist is doing a good job, these musical bundles tend towards the latter, giving the prospective listener background on the band, upcoming show dates, and a hint of what the band might sound like. Press photos, on the other hand, are all too often exceedingly cheesy — firghtful images that make you cringe and wonder in horror at why someone would include that picture if they actually wanted you to listen to the record.

Junior Private Detective's glossy 8-by-10 band photo thus proved a welcome surprise. One look at the croquet mallets held aloft and their signature Carmen San Diego-like logo emblazoned on the bottom and I had a hunch that I'd enjoy Square, their debut LP. Yes, I know, don't judge a book by its cover and all that… but come on, they're holding croquet mallets! What can I say — I am easily seduced by lawn-based game implements.

A perfect example of JPD's math pop can be heard in "To-Do List." This track repeatedly spirals almost out of control, gaining pace like a tricycle rushing headlong down a hill only to escape a dramatic crash at the penultimate moment. "Your Horoscope," by contrast, sounds far more spacious and orchestral. Here JPD foregrounds the piano against dark, meaty guitars to create a swirling rock symphony. The expansive sound captured on Square makes me wonder what JPD's live show might be like. Can they possible sound as lush in person? Here's hoping Seattle has a chance to solve this mystery soon.