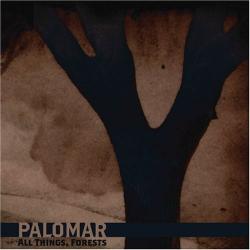 Palomar, they’re all grown up now. It's almost that the modern rock universe needed to stay in balance after the departure of Rainer Maria, and Palomar were more than happy to fill that roster spot. All Things, Forests finds Palomar at their darkest, yet also their most textured and complex, producing an album that can, at the same time, be riveting and frustrating as you hack through the band’s dense but intelligent pop songs.

I fell in love with Palomar on their second album II, and especially the almost perfect lo-fi pop classic “Knockout.” There was an unassuming charm to the song that made it something of a perfect pick-me-up for all occasions. Since then, Palomar has gotten more mature and refined with their sound, and it is at its best on All Things, Forests. The opening track “Bury Me Closer” is a brilliant little dark pop song, with richly textured guitars mixed with elegant harmonies on top of the bittersweet melody. The new depth to Rachel Warren’s vocals becomes immediately apparent on the record, dipping into same territory as Caithlin De Marrais of the aforementioned Rainer Maria. “Our Haunt” has a similar dark streak that on one hand seems very fresh for Palomar, yet at the same time, seems a completely logical place for the band to be, especially when the band string together songs like “Bury Me Closer," “Our Haunt,” and “How to Beat Dementia."

This melancholy pop is an underappreciated subgenre – how many bands aspire to make memorable songs that have depth yet fail miserably? – but Palomar seems to have cracked that code. Of course, the band can get a little bogged down with their newfound profundity. Tracks like “The Air Between Us” just seem to plod along and “You’re Keeping Us Up All Night” never seems to gel, trapped between the light and airy guitar and soggy rhythm section. It's fun to hear Palomar try a little bit of a Liz Phair on “He Came to Stay,” a song that would have been quite welcome on Whip-Smart. The closest we get to the uberfun Palomar of days gone by is the synth-pop delight, “Top Banana.” It seems out of place in the din of darker songs that surround it, which is too bad as it's one of the high points on the disc.

Otherwise, the band fills the album with song pop songs that make the album very listenable from start to finish – with standouts like “Woah!” making it all that much better to listen to the infectious pop rock that Palomar has honed. It might not be the most original song you’ll ever hear, but if it doesn’t get “Woah!” stuck in your head, then you know you’re probably taking yourself a little too seriously.

All Things, Forests is a frustratingly uneven album but luckily, the great songs far outweigh the half-imagined ones. Even with the jaggedness, the maturity exhibited by Palomar is remarkable; the songs have such a new depth to them that you wonder how Palomar existed before now. Palomar might be at a turning point, much like Rainer Maria after Look Now, Look Again, and will have to decide which track they will follow – that towards the pop songs that make them fun or the richness that will make them great. Until then, All Things, Forests can tease us with the potential.