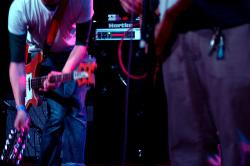 When TIG decided to host not one but two shows to celebrate our 5th birthday, we knew it would be a blast of a weekend. And we were right. We had the times of our imaginary lives, and we owe it all to you… well, and to the fabulous bands who played (BOAT, the Shaky Hands, Dolour, Eux Autres, Patience Please, and the Western States Motels, we HEART THEE!!!!).

Here are a few words and images from the imaginary staff to relay the fun times.

Here's to imaginary year number six, and beyond!

"On my summer vacation, I went to Seattle and saw Dana and David and Rick and Mona and Fellini and Kaylee and Jesse and Ever and Liz and Kelly and Andras and Cal and Stacia and Pete and Bijou and Christine and Char and Brian and Robby and Embracey and Melissa and ChrisB and Rick and BOAT and Jimi and Kjersti and Jason and Elle and Kiku and Stella and Chelsea and Jeremy and a lot of other people. It was fun and I got to wear fake eyelashes. The End."

"Whoooo-eee, that was a party if I've ever seen one! BOAT really brought down the house with their trademark fun, playful performance (I brought my "Official BOAT Shaker" and geeked out in the front row!), and Patience Please were spot on, as always. These two were my favorites of the night and both bands deserved to sell about a million (at the very least!) copies of their new releases. The ever-lovely Eux Autres played an impressive set, too. The Shaky Hands were a bit more rock and a bit less pop than the other bands, but their percussionist (not their drummer, but their cowbell/shakers/etc. player) was a kick to watch dancing around in his aviator sunglasses!"

"My highlights from the Friday night Croc show:

* Dana's hair. I still want to know what those crafty VAIN folks put in there to make it beehive so Winehouse-ily.
* Liz's hair. I like to imagine she's wearing the blue extensions on her travels, days later, right this minute.
* Char's hair. Mainly just because it was attached to Char, who is a general delight."

"The Shaky Hands have so much energy. At one point at the end of their set, I almost called 9-1-1 because they were writhing around — on the floor and standing up — with such intensity, I though for sure they were on fire. Seriously, I've never seen anyone play the cowbell with such fervor in my life. And this was at the Vera Project all ages show, so I'm pretty sure it wasn't alcohol induced fervor.

At the Croc show, I loved watching all of the tig staff members who had never met (but had exchanged witty banter via the imagiblog) meet each other. There were hugs, there were tears, it was like a show on Lifetime television for women… Without Valerie Bertinelli playing the poor-single-mom-being-stalked-by-her-ex-husband's-father plotline."

"There was much, much to love about the the two evenings. I had the rare pleasure in seeing many of my favorite people in the world in a span of about 27 hours; at the Croc on Friday night the beer was flowing freely (and free) and it was wonderful to meet Betsy Boston, Elle, Imaginary Chelsea, and Imaginary Kiku, all de-lovelies who I've only known of through this site and not known until this weekend. Yet, as Kylie Minogue once put it (probably dishonestly in her case and certainly in mine), "I'm just here for the
music." I'm sure that most people will be commenting on BOAT and The Shaky Hands (or as I now call them, with affection, "Clap Your Shaky Hands Say Yeah") – and for good reason – and all of the bands were terrific, truth be told. If I had to pick just one, it would be the returning champions, Dolour (who also played TIG's 3rd birthday party). Lead singer Shane Tutmarc is one of the best and most consistent songwriters in town. I really love the Beach Boys-influenced pop from one of the northwest's finest bands."

Getting to feel like a super rockstar at VAIN for our makeovers was definitely a treat and if you ever have the chance to do it yourself, I highly recommend. I couldn't possibly pick a favorite band — they were all so incredible! I thought the Western States Motel were an incredibly happy surprise, and BOAT of course stole both the shows.

"Of course meeting all the Imaginary writers was an amazing thing. It was so neat to be at a show with dozens of folks who really love the Seattle music scene. Seeing everyone in their party dresses was fun too :]

Although many of the over-21 crowd were most likely all partied out from the previous night's show, the enthusiasm and energy was still overwhelmingly present in BOAT's spectacular performance. This was the third time I've seen BOAT live, and it seems like every show they play they add something new. With their quirky assortment of odd instruments, their interaction with the audience (ahm, Official BOAT Shakers!) and their killer rock-star dance moves, it's obvious that they love music, and performing, and really you couldn't ask for nicer guys to provide your pop music fix."