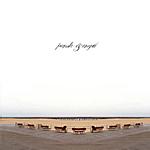 Nothing like gloom to help brighten a Pacific Northwest spring! Not that there's anything wrong with that when it comes from Seattle upstarts Panda & Angel. They bring a little shoegazer to roost here in Puget Sound on their self-titled debut EP on indie stalwart label Jade Tree, and as if to fill the hole created by recently defunct Denali, Panda & Angel harkens to the sound of Lush with a more aggressive bent.

The key to shoegazer was that although the distortion and wall-to-wall sound that defines the genre is what people associate with it, it is really the melody that drives the songs through the noise. Panda & Angel get that, and the opening track "Mexico" lilts with a gentle melody that slowly morphs into a rumble as Carrie Murphy's vocals rise above the din. The guitars are joined by a variety of instruments that give it a bit of a Lush-meets-Joan of Arc feel. While "Mexico" has an almost uplifting tone, "Dangerous" is more desperate and takes its cue from My Bloody Valentine with monotone vocals over clashing guitars. The tension builds across the song as Carrie sings you wish you could take it back/wanting something you can't have as Josh Ackerley's guitar hammers away. The juxtaposition of "Dangerous" with a song like "China" exhibits the dynamic range of Panda & Angel, where the roaring guitar and monotone vocals are replaced by a quietly strummed guitar and gentle, hushed vocals where Carrie warns that I'm going to move to China/and disappear. The strongest points for Panda & Angel lie in the melodies they construct over the tumult. "Ohio December 24th" demonstrates that fully with a flourishing musicality of strings, guitar, chimes and other knick-knacks. This spreads into "A Thousand Whispers" that has a Liz Phair-type melody wrapped in a thick shoegazing racket as if Liz grew up in England rather than the States. The song glides back and forth from a quiet, plucked guitar line to an all out onslaught from all direction, yet never loses itself in the noise, a tricky thing to do sometimes when you have a propensity for sonic detonations.

Panda & Angel dance a fine line between the distortion that wraps many of the songs and a gentle melody that drives them. If their debut EP is any indication, they can navigate this border with a deftness that is beyond their brief existence as a band. Maybe all the dark and grey gets to people more than we want to admit, but with upstart bands like Panda & Angel and Mon Frere, at least Seattle can boast a resurgent indie music scene.