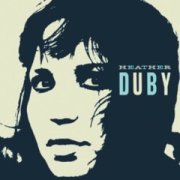 It's been a few years since we last heard from Heather Duby. Her last two records, Post to Wire and Come Across the River, firmly established her as a leader in the "Seattle solo artist" sect of independent music, and the level of quality on those records made the anticipatory wait for a third record less than easy.

Duby's new release breaks ground as her first self-titled record; fitting, as the record finds a fusion of her past stylings (sometimes electronic, sometimes more organic) that combine to form a complete, unwavering voice. This is undeniably Duby, and undeniably honest and raw. Personal and terrible, Duby guides her listener through songs that are formed like the most tragic of art: Something dire made out of something beautiful. A woman weeping is a beautiful thing, she seems to be telling us. And proving it, at the same time.

Heather Duby opens with "Never Even Made a Voyage," a track which illustrates the light/heavy, sad/happy, electronic/organic dualism that characterizes the rest of the album. Her soothing voice reveals itself to be sinister, as one wants to invite it in, only to then find that her lyrics are sharp and painful under their satiny texture. "Take this, my heart / me and all my problems, bored you from the upstart," she sings on "Wrestle and Cuss." "Worthless, crying eyes / worthless, crying eyes."

The dark electronic melancholy of "Wrestle and Cuss," with its haunting strings and slow build, juxtaposes more hopeful, bouncy beats ("Would have liked you"; "Still Rough") that even break into a major key at times.

"Never Made…" begins with layered, reverb-swallowed vocals accompanied by chunky and thick electric guitar. One feels as though they are entering a cave, getting deeper and deeper into the earth. "My self-mentruation begins," she sings, and then, suddenly, the chorus enters sweet and bright, with rapid vocals and a single vocal line in the front of the mix. The juxtaposition between the darkness of the verses and brightness of the chorus act as a push-pull of tension that makes both ends of the spectrum so much the better. This very effect, this tension between tragedy and beauty, is what made Shakespeare's plays so effective and timeless. It makes Heather Duby a record to be heard immediately.

And just when you think the record is done… keep listening. There's a battlefield of love hidden towards the end that will make you smile like a child in a sandbox.