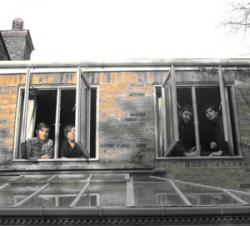 Papercuts at The Vera Project and no one left bleeding

Saturday night at The Vera Project featured Port O’Brien opening for Papercuts. The crowd was thin but enthusiastic and these California-based bands held their attention rapt. While Papercuts tend to be more 60s inspired shoegaze and Port O’Brien sidesteps an easy country rock label by being so noisy, they share a heaviness that impressed itself onto The Vera viewers. Whether it be a pound of fuzzy reverb, in the case of Papercuts, or a pound of toms, in Port O’Brien, pound for pound these bands are heavyweights.

When Papercuts started playing it felt as if I were hearing them from across a wind swept chasm filled with rushing water. Maybe it was because the crowd was mostly empty or, more likely; this was just the power of Jason Robert Quever, the creative force behind San Francisco band, Papercuts.

Quever has played with bands like Casiotone For The Painfully Alone and Vetiver. Most recently he put out the latest Papercuts album, You can Have What You Want, on Gnomonsong, a label founded by Devendra Banhart and Andy Cabic.

An unassuming fellow, Quever played the guitar and a tiny Casio keyboard. He was accompanied by a full keyboard making mostly organ sounds, a bass, and a drummer who harmonized with his high-pitched lyrics. The Papercuts’ lineup is generally in flux. Perhaps this is why they had no set list and instead Quever called out songs.

“Once We Walked In The Sunlight,” off the new release, was introduced by sudden drumming, but found the wavering stride of the album version as it continued. He conferred with his band mates, saying, “John Brown” under his breath and the keyboardist’s fingers started to spider step over the keys. This moody tune off Can’t Go Back, drifted towards us, catching our knees and necks and rocking us forward and back.

Perfectly content to let a smattering of his songs stand for themselves with little stage banter between his sweeping compositions, Quever’s songs rise into a wall of static sound where it’s hard to find a nail to hang something on. This was in contrast to Port O’Brien who, by the last song, had four young boys on stage, half the audience banging away on pots and pans provided by the band, and everyone howling along to the chorus of “I Woke Up Today,” off their 2007 release The Wind and The Swell.

I can understand why M. Ward has named Port O’Brien one of his favorite new bands. They released their first album on American Dust, but seem to have taken matters into their own hands with the release of All We Could Do Was Sing, out in 2008. Formed in 2005, Port O’Brien has a sound built on all things Americana but they stand alone on the range, like Mt. Rainer, making a weather all their own. I only wish I could have heard the banjo better.