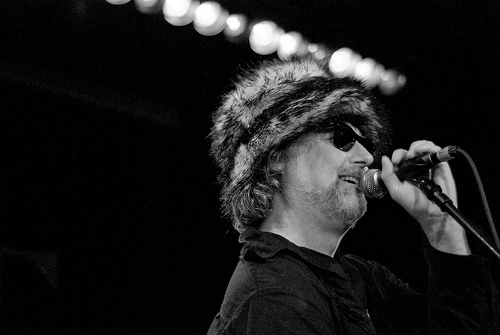 News flash: the Young Fresh Fellows and the Tripwires will rock your face off

I’ve written up this review several times, abandoned a half-dozen drafts, and have decided that it’s best to just give it to you straight:

The Tripwires and the Young Fresh Fellows rocked our fucking faces off on Friday night.

There, I said it. And pardon my choice of adjective, but there’s really no other way to explain how good this show was. The bands were unbelievably tight, the choice of venue was perfect (The Tractor, obvs) and the sound was absolutely stellar. I mean, I actively sought out and purchased a poster. A poster. Do you remember the last time you did that? I do. It was when the Wrens and Okkervil River played two nights at Neumo’s for the KEXP Yule Benefit a few years back. (Talk about getting your face rocked off!) And that’s the kind of night this was, only on a smaller scale — a well-matched bill, perfectly executed, with the three of us ambling down the sidewalk afterward, all reeling and sweaty and shouting over our ringing ears.

The night was part of a two-stop jaunt for the release of the newest Young Fresh Fellows album, I Think This Is, with shows in Seattle and Portland last Friday and Saturday respectively. Unlike a lot of long-standing rock acts, bands like the YFF seem to be immune from the progression of a steady album quality decline over the years — or at least, that’s how the related songs translate at their shows. Picks from earlier work, brand-new releases, and everything in-between were a cohesive delivery of the band’s strengths, dialing up influences here and there as the songs called for them. We could hear the infusion of everything from surfer-punk to Beatles to grunge, old Who and Kinks records, strains of side projects and modern punk sensibility — all shot through with the kind of delivery that only guys who have known each other for a few decades (or at least one or two) can give. And extra points go to the YFF for busting out a raging dirty guitar-noise cover of “Hang On Sloopy” toward the end of the set that just about put us all over the edge.

Although they were billed as the ‘opening’ act, the Tripwires blew us right out of our Chucks just as much as the YFF did. Everything in the paragraph above applies duly, with an extra serving super-sweet harmonies and all of the compliments paid double. And as is the case with both bands, everyone in them, and all of their other collectives and formations: any time you see any of these bands or any of their side projects playing anywhere, ever, break your plans and go see the show. You won’t be disappointed. I mean, with Scott McCaughey, Johnny Sangster, Jim Sangster, Mark Pickerel, Kurt Bloch, and John Ramberg anywhere in the  house — you really can’t go wrong.

{As per usual, a few snapshots to follow, with a whole set residing in the imaginary flickr pool — enjoy!}