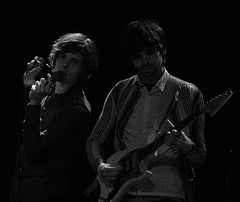 Just as the elegantly transgressive Parenthetical Girls release their new album Entanglements and are playing the CD's release on September 7 at Portland's Leftbank/Time Based Art Festival, Seattle friends Dead Science and Tomlab label-mates No Kids release remixes of two of its songs, "Young Eucharists" and "The Regrettable End." Download these dazzling gems now, as they will not be released commercially.

I can understand why Sam Mickens and his band-mates are doing a version of "Young Eucharists," because I have to be honest: It is possibly my favorite song of the year (besides the best in hip-hop). The Dead Science keep its elegance too, though I ache from the absence of Zac Pennington's intoxicatingly deviant vocals.

The Portland-based Parenthetical Girls have gone all out on this full-length, and if you know them from their spare, precise live sets, its full-on orchestral tumescence and compositional resplendence may devastate you. How this will transpire live remains to be seen. I just wish they had plans to come to Seattle soon and allow us to see it (especially since the album was recorded between here and Portland). Here are those East Coast dates, those lucky people: