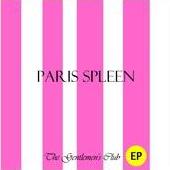 Tacoma band Paris Spleen, whose name suitably comes from a Charles Baudelaire book of poetry, has added a decadent dollop of new disco to their moaning, scratching, fitful post-post-punk sound with The Gentlemen's Club EP, a follow-up to their self-titled, self-released LP from last year.

Recorded at the Gloom House and produced and engineered by Kyle Brunette, the five-song EP opens with a Gang of Four-style guitar-shredding attack on a song from their debut album. "Sex Disco" is deepened with a fat bottom end since its more garage rock beginnings on the first record. Joshua Vega, Brooke Envy, and Dyb Arter (who have no defined roles on the EP jacket but sound like they all sing) offer up a snarling ode to dancing, probably of the nasty variety. ("Shake off the filth — you wear a silver watch but you can hardly keep the time.) A convincing bridge of orgasmic groans finishes the song, as it leads into my favorite track on The Gentlemen's Club EP, the melancholy "J'Adore." Its verses feature a lead vocal reminiscent of Jeff Suffering, but on the choruses the other voices join in, making a delightful tangle of apocalyptic near-aphasia.

"Thin White Line" is also brought back from the first album, and its similarity to Dead or Alive's "You Spin Me Round" in the chorus is even more pronounced with better production. "Daddy So Weak" pushes more into bluntly Franz Ferdinand territory, with its chanting and chunky shuffle (a main feature of the band, to be honest), and the EP closes on the moody, intricate early New York art-punk of "Today, Tomorrow." Good stuff.