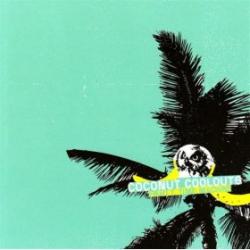 I imagine that the six members of this band probably have the time of their lives when they get together. Any band that has given themselves such a goofball moniker and plays such giddy sounding pop/punk should sound as freewheeling and anxious as Coconut Coolouts does on this album.

The 11 songs on this album whiz by leaving behind jet-streams of infectious energy  and a smattering of catchy choruses that sound like they were custom made for live show singalongs. In fact, it is quite obvious throughout this album that the songs here are probably better served in a live setting than they are in their recorded models.

Coconut Coolouts is, in that sense, reminiscent of groups like Tuscadero and Bis, artists who are a downright blast to watch live, but pump out music that can easily be left behind conscience-free. The CDs and records that bands like that put out are nice reminders of the fun you had drunk on vodka tonics and dancing like crazy with your friends, but inevitably end up sitting on your shelves for a few years before you either give it away to a friend or end up selling it off.

We all have still or have had albums like this in our personal collections, and there's nothing at all to be ashamed about. True, in 20 years or more, like the unbelievable number of garage rock bands that are being heralded as geniuses of their time, Coconut Coolouts may finally get their due. Now, fortunately or unfortunately as the case may be, they are serving a simple and singular purpose – to be ingested like a drink or a drug and then slowly worked out of one's system.