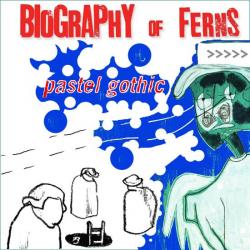 Finally! One of Seattle's great indie rock-slash-punk hybrids, Biography of Ferns, has released a collection of songs they've been destroying live since formation around the turn of the century ("2001-2006" to be exact). Commie-spirited band blame-sharers Justin, Brett, and Larry love all the same guitar-bass-drum trios a lot of us TIG-type people do, and then stop to ask, "What would a band resembling those sound like now, without sounding anything too much like any of them?"

Pastel Gothic could easily be the second Cure album that never happened because Mr. Smith Goes To Siouxsie, Stranglers, and Joy Division, and thus Seventeen Seconds happening instead. Justin's vocals have an obvious Brit influence, but are not pained or pretentious. The lyrics bounce between addressing the dangers of social initimacy and political complacency within each line, like all your favorite Marxian power-pop philosophers. Like the first American releases for The Figurines and the Futureheads, I can listen to this bouncy, jagged, six string-spanking album all day long — but have to admit that the strangely French-style croon of "False Candle" makes me hit repeat for the number of that track for at least a third of that time.

In the friendly, frantic, frank liner notes Biography of Ferns reveals their agenda, which is basically a plea for people to be kind and honest and stop putting themselves first. (I could have used a lyric sheet, but it's hard to disagree.) I also found that this CD sounds so good must be attributed as well to the deft engineering of Jack Endino, one of the kindest and most honest people I've ever met in the Seattle music scene. No surprise there — but plenty of melodic surprises through this record, that's for sure.