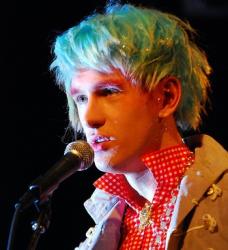 Patrick Wolf's set started out with a small orchestra consisting of a double bass, violin, drums and a programmer filing out on stage in silence. The backdrop, a painting of woods with polka dots streaming through the trees, gave a visual intro to the haunting sounds they started playing. As wolf howls began soaring through the air during "Wolf Song/Overture," Patrick Wolf himself pranced on stage tripped out in a military jacket a la Sergeant Pepper with a fringe of pom-pom balls big enough to shame the first prize at a Rocky Mountain Oysterfest. Woof.

You could tell this show was going to be good just from the wide ranging musical influences Wolf has incorporated into his works. After playing keyboard, baritone ukulele and bowing or plucking on his viola, Wolf temporarily gave up his instruments for the mic. While the songs were poorer without his touch, it gave the programmer a chance to mix live self-harmonizations during "Wind in the Wires."

During the ode to teenage energy, "Tristan," Wolf's gyrations led him over to the side of the stage where he began air-humping the violinist Victoria Sutherland. Later he explained that they had studied under the same music teacher and she had played at his first proper show, but in the meantime Sutherland was turning a bright red as she grinned affectionately at his antics. The whole show was like this: Wolf would dash off to different parts of the stage, pick out a member of the crowd to sing to, then wheel off into another dance set that occasionally ended up with precarious poses on the bass drum.

When a crowd member shouted, "I saw you at Walgreens!" Wolf sheepishly admitted to browsing the makeup in the Halloween section. He loves Halloween, but says it's more of an every day celebration for him. And no wonder…

If there were a template for a British schoolboy stripper's outfit, Wolf's got it down pat. He was clad in chunky high-heeled mules that I wouldn't mind owning myself, accompanied by sparkly golden suspenders and a silver wig shot through with glitter and pale blue streaks – but only the shoes lasted throughout the main set. Throughout the show Wolf slowly shed his layers, adding accessories like a golden foil lion's mane and long, large-beaded necklaces. And glitter. So much glitter. On his face, legs, arms, hair, even around his belly button?! The dazzling shimmer made Wolf's unicorn tattoo (over his heart) stand out loud and proud. When he left to do an encore, the shiny Wolf came back with so much glitter in his hair that every time he shook his head, it looked like Tinkerbell was trying to make him fly with an overdose of her pixie dust. One of his fans came prepared and doused him with bright red glitter during the last song; Wolf grinned madly and kept on dancing.

Near the end, Wolf brought opener Bishi on stage to sing his new duet, "Magpie." Her strong but girlish voice seemed at contrast with her sturdy and intimidating outfit (it was right out of Queen Amidala's closet), but the duo was quite a powerful team as they alternated whispering then joined together at the close for the barely breathed line, "seven for a secret, never to be told."

Patrick Wolf's well-orchestrated glitter-pop will probably never have the large following he deserves in the U.S.; we have a poor showing of flamboyant male alterna-pop stars in the States (the ones I can count fit on one hand) so fans who enjoy this genre end up importing records and dreaming of U.S. tours. The density of loyal fans in the audience at Neumo's was amazing, but so was Wolf's reaction to them: when a fan reached up to him on stage, he would grab their hand and hold it. After the show, giddy acolytes in their own glittery dressings handed Wolf mix CDs or notes or high-fived him on his way off the stage. Outside, people talked about what they'd say to him when he came out. "I hear he's super nice, really approachable."

Seattle was a lucky stop on Wolf's State-side tour; according to him, this is one of the last sets of shows he'll be playing for a while. While it's not "Cher's Final Tour," Wolf explained during his set, "…it's definitely become the "Cher Needs a Break Tour."

Well, duh. Even the unsinkable Cher would need a break after the amount of frenetic dancing and emotionally-draining songs (accompanied by diary-entry explanations) that Patrick Wolf has been putting out there for nigh a year and a half – and his tour doesn't end until he hits the U.K. in December. Fare thee well, Wolfboy.