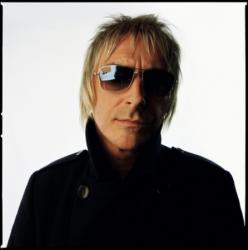 Paul Weller at the Moore

A little over a year ago, From The Jam, a band made up of 2/3 of the original lineup for The Jam (sans frontman Paul Weller) playing songs by The Jam played at the Moore Theater and about that show, which I thoroughly enjoyed, I wrote:

…the most rock and roll part of the evening did not directly involve the Jam. During the time the band left the stage for the encore, (local music legend Kurt) Bloch jumped on stage to announce into one of the microphones that “Paul Weller is a cunt.”

A few months after that, I met Bloch at a show at Chop Suey where his current band, Thee Sgt. Major III, was playing and I asked him about that incident. He said “I don’t really think Paul Weller is a cunt, I just thought it would be a funny thing to say.” That doesn’t really have much to do with this review or Weller’s show Wednesday night, but made for a fun story to (re)tell.

The Modfather, as he’s commonly called, came to Seattle last Wednesday night for his first Seattle show in many, many years – returning to the scene of the above crime, the Moore. With many people wondering if there’d ever be a reunion for The Jam, Weller made it clear that he is interested in playing his own solo material (mostly), but it has been pretty consistent and solid since. He was touring in support of his latest – and very good – double album, 22 Dreams.

Shortly after 8pm, Weller came out on stage, without an opening act. If you thought you could show up a little late and skip the opening band, you would have been mistaken here. Fortunately for all, Weller played for a very long time. I think this might be the first show I’ve been to in several years where the performer played a set that lasted well over two hours. People who don’t have fun playing live don’t play for two hours. You can expect about an hour but if someone wants to justify ticket costs, maybe an hour and a half. If they really, really love what they do, they’ll play for as long as Weller did Wednesday night.

He opened with his song “Wild Blue Yonder” and played his set spanning most of his nine solo albums. Many of the songs he played were from 22 Dreams, including the title track, “Have You Made Up Your Mind?” and “One Bright Star”, which he called a “psychedelic tango”.

When Weller was on stage, he sounded great. His voice was strong and filled up the Moore. He and his band didn’t stay too faithful to the original compositions of his songs, often using reverb, feedback and pure noise throughout the set. The pure rock and/or roll songs sounded fuller and more realized that the ballads he played. He told Seattle Weekly’s Michael Alan Goldberg last week in a really great Q&A, “Well, when you play any song live it always takes on a life of its own anyway. I don't slavishly try to reproduce what we've done on a record, so a song naturally takes on a different life.”

Weller made one comment from the stage about how we should “bring all your friends next time”; I’m not sure if he meant that because he was disappointed there were empty seats (I couldn’t see how full the balcony was but the main floor was pretty full but not sold out). If he was bothered, it didn’t show anywhere else in his performance. He rocked the Moore and I’m sure thrilled everyone there.

His setlist included at least two dozen songs and it was wholly unpredictable. He even sang a few verses to a song by one band he always cites as a huge influence, “Magic Bus” by The Who.

To answer the one question I’ve been repeatedly asked since the show, he played two songs by The Jam: “Butterfly Collector” and (the final encore) “The Eton Rifles” and they both were fan-fucking-tastic.