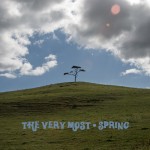 Diana Salier April 20, 2009 no Comments
It's no surprise that this quintet from Boise, Idaho wrote a song called "Scotland," which starts with the matter-of-fact statement that "All the best bands are from Scotland," and continues on to cite Belle and Sebastian, Teenage Fanclub, and Camera Obscura as prime examples. The Very Most are the next in a line of feel-good pop bands, whose latest Spring EP will warm you up so fast you'll forget it's still cold outside.
In barely 14 minutes, the band blasts through 4 songs that celebrate all the fun times that come with the end of winter — starting with "Today It Is Even Better," an upbeat onslaught of tambourines, handclaps, acoustic guitar and the requisite background oohs, aahs and ba-ba-ba's. Next up is "April Is The Kindest Month," a Beach Boys-esque tune that languidly plays out like the sonic version of a lazy day in the grass.
Synth-laden third track "The Only Pretty Ring Time" begins as a mid-tempo pop tune with more oohs, keyboards, and an electronic drum track before the lyrics drop in and puzzle over why Boise is known as the City of Trees — then the 1:48 mark hits and suddenly it's a hoe-down, an abrupt alt-country shuffle with acoustic drums in the back and a hat tip to Shakespeare's As You Like It in the front, "In springtime/the only pretty ring time/birds sing." Just as quickly as it started, the section ends and we're back to oddly endearing lyrics about those darn springtime plant allergies that only indie-pop bands can ever get away with.
Rounding out the EP is an instrumental track, "A Two Week, Springtime, 7th Grade 'Romance,'" which relies on two keyboards, bells and a bevy of other instruments playing the same melody line over and over — it's a full return to that lazy day in the grass, and ends with 16 seconds of ambient bird chirping noises.
Spring has sprung — and in case you're reading this from somewhere in the world where the weather doesn't quite listen to what the calendar says, just do what the Very Most does: ignore it, and listen to some indie pop. Voila, instant springtime!