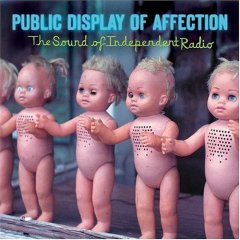 Public Display of Affection: The Sound of Independent Radio

Compilation albums can be pretty sketchy animals. Personally, I'm a big fan. They're usually cheap and you can get a taste of artists/styles/labels you might otherwise ignore; as long as there's one recognizably good artist or song, you're generally getting your money's worth.

This comp was put together by four DJs from public radio stations scattered across the country, most notable to many readers here because one of those DJs is KEXP demi-god John "In The Morning" Richards. It highlights a broad spectrum of artists, some signed, some unsigned, all helping to keep alive the spirit of independent broadcasting, "the spirit that led you to your first record purchase, your first concert, your first 'after show pass' where you nibbled from the cheese tray alongside the college radio DJ and a writer from the Bob." The big question now is, "How did they do?" Because I'm a compulsive list-maker, here's the breakdown of who chose what for this comp and how I rated 'em: <

Here are all of the gory details…

One of John's selections opens the the album, "Longway Around" by Cowboy Curtis. On my first listen through, this one felt a bit generic, distinguished only by a couple of gimmicky production tricks, but on repeated listenings the effected guitar "hook" became more and more compelling. After a few spins, I was totally sold on this one. Quality indie guitar pop here; so far so good.

Ruby Vileos is up next with a mellowish pop song that put me in mind of a less introverted Chan Marshall. The song feels like it should be building to some sort of explosion, but then it never explodes. I actually think this is a good thing (the whole soft-bit,/loud-bit/soft-bit alterna-style of songwriting tends to grind my last nerve). A couple of songs in and I'm thinking this compilation just might be one of the good ones afterall.

Another John selection is up next, it's called "Driving You Home" by a band called Passenger. Yawn. Excuse me. I think I liked this band better when they were called Travis. Or Coldplay. Not horrible, but really uninspiring. Next. "Hold On (The Prison Song)" by Amy Correia has, most obviously, stylistic references to folk and blues music, but transcends both. Lovely mood and melody, plus I'm a sucker for strings, and this song has strings. Not to mention tons of character in the vocals (I'd say quirky, but I imagine she hears that- and hates it- a lot), there's almost a boozy/woozy quality that's a bit intoxicating (not a million miles from Rickie Lee Jones). Two enthusiastic thumbs up. Note to self — must find out more about Amy Correia…

Imagine John Mayer had a chest cold that wouldn't go away… wait, I don't have to imagine it. I just heard it in the form of Milton's "In the City." This is inoffensive acoustic rock that sounds like something you'd here in a frat house basement on a Friday night. No. Nonononono. Good day sir. I SAID GOOD DAY!

Time to shift gears with a little country rawk. I don't remember where, but I've heard Hell's Half Acre before, though this is my first time with "Sun Comes Up." The voice sounds a bit like Dave Lowry from Camper Van Cracker, which is pretty cool in my book. Dirty alt-country feel to the music with a nice little guitar breakdown about halfway in and catchy choruses ("we'll get high and watch the sun come up again"). Nice.

Another familiar name, Eleni Mandell, pops up next. She's been around for a bit and for my life I can't figure why more people don't know her. I hate to admit how little I knew about her before I gave this comp a spin, but this song drove me to the record store to find out more. Her sexy, soulful voice is the most prominent feature of the track included here entitled (appropriately enough) "Can't You See I'm Soulful." Smooth, understated country licks carry the rest of the load. She's inspired by X and has some ties to Tom Waits, she's been described as an American (or, more recently alt-country) PJ Harvey. It's not only a pretty fair and convenient description. She's covered a lot of ground in her career, recently leaning more toward the kind of country vibe on display here (check her earlier records for a darker, more rock/pop feel). This track is definitely one of the highlights of the disc.

"Red" by David Berkeley is the next song, and it's a bit of a disappointment. Berkeley's an award winning songsmith (and you can hear why in the well written traditional narrative of the lyrics), but the production and performance is very middle-of-the-road, lacking any real character. It's solid, but after hearing the song, it seems like he's better suited for behind the scenes than in front of the mic. Consider this cut damned with faint praise.

Filmschool is the only band on this compilation to which I had any real previous exposure. I caught them (accidentally, really) live just a couple of months ago and, not really knowing what to expect, was very pleasantly surprised. I got an earful of atmospheric guitar-based pop with an appropriate name, as Filmschool seemed to have a cinematic feel in their mood and dynamics. I picked up their EP that night and they had a fan. The overall vibe was spacey and psychedelic and pretty mellow. The track included here, "Harmed," is a bit rockier and serves to increase my interest exponentially. Another highlight of this compilation.

The Sharp Things spin proceedings in yet a different direction with a mellow chamber pop song ("Demon of Love") that calls to mind Burt Bachrach and other sixties pop writers of that ilk. The vocals remind me a lot of Mark Hollis from Talk Talk. In spite of those two big pluses, the tune just doesn't work that well. It falls somewhere short of its wide scale ambition and feels more like a genre pastiche than a distinct song of it's own. Not horrible, though I get the feeling these guys are capable of more.

The guitar hook driving "All the King's Men" forward from the intro bodes well for the penultimate cut included here. Benzos are a New York six-piece with ideas rooted in electronica, but lush guitar work and soaring lead lines that lay somewhere between U2 and Radiohead. The rhythms are reminiscent of that angular post-punk the kids are into today. This song should sound tired and derivative, but it actually works pretty well. I have a feeling we'll be hearing more from these guys, which should work out fine for all parties concerned.

The collection winds down with the acoustic "Oxygen" by Willy Mason. Multi-tracked vocals and an acoustic guitar. I somehow suspect he was very pleased with his lyrics, I wasn't, though. The voice is like a less polished American version of Chris Martin from Coldplay. The guitar is strummy. I have very little else to say about this one. Bored my socks right off.

Brief let down at the
end aside, this is a pretty solid set. Overall the comp gets a solid six. Not too shabby. My discovery through this set of songs of Eleni Mandell is enough, though, for me to recommend this collection. Thank you, Nettwerk.