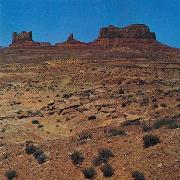 It's hard to surprise me. Some might say I'm a bit of a cynic, but I would say I'm a realist. I'm always starved to hear some new band, some new sound, some new anything that really hits me in that inexplicable way in which my favorites always seem to hit me. Sometimes, though, the best stuff comes when I expect it least. I search high and low for a new buzz, and then, as soon as I'm looking the other direction, one suddenly lands in the inbox. Welcome to my first experience with the Occasion.

The songs collected here were recorded over the course of two years by this New York five-piece. Given that fact, there is a remarkable cohesiveness in mood. Trading vocals between their pianist, guitarist, and drummer, this self-titled release by the Occasion is driven forward by the bass with a minimal insistence that helps create tension without a need for major musical explosions (though there are a couple of those). They incorporate tape loops to add additional ambience to a compelling mix of minor-chord mood and emotional drive. Intensity transmits itself to the listener in spite of (or maybe because of) the generally quiet and brooding feel of this record; it seems generally a low-key affair, but carries a lot of psychological heft, yet never seems to get tripped up by its own gravitas (the running order is really key in this regard).

This music aches, it longs, but it's not without release. It's mood is somewhat familiar, but the sound is fairly unique. Radiohead has, over the past couple of years, provided convenient musical shorthand for pop music that is unusual, but still accessible; that is dark and remote while retaining some element of humanity and intimacy… it's nice to hear a band treading some of this same emotionally fragile landscape without attempting to filch from that overly-emulated band.

Let's talk specifics. Album opener "The Midwife" makes me feel sad in the best possible way, the minor chord changes evoking a palpable sense of melancholy. "I Can't Stop Falling" begins with an insistent and menacing bassline driving the song while an electric piano recalls some vague sense of the Doors, but then builds to an angular guitar driven ending, all the while maintaining that steady drive. "Ease Away," my favorite album track, recalls the mood of late era Joy Division (think "In a Lonely Place") via a sound not-dissimilar to a stripped down Portishead.

Sure, I know everyone tosses the Joy Division comparisons at bands like kids throw pennies at a mall court fountain, and I'm not saying these guys sound like JD (they don't — in fact the singer seems to be aping Morrissey far more than Ian Curtis). The one thing that all the reverb-laden post-punkiness that garner aforementioned comparisons misses is the feeling of that band… these guys actually nail it here. There's a quiet desperation, and a sense of desolation that still somehow finds a way to be inviting.

The next track, "The Deserters," is the most uptempo and electronic, on what is a very organic album; it punches up the mood at just the right time with it's driving beat and short run length, recalling classic Kraftwerk. It adds a little energy without breaking the pensive and introverted vibe that has been established; it's another highpoint. The album closes with the slow building psychedelic minimalism of "Annika," which starts out like a lost Luna track and ends with a torrent of noise and a messy collapse reminiscent of a less chaotic, but no less powerful, Birthday Party, then a looped sample of applause — a well-deserved pat on the back.

The Occasion make a sound that, to paraphrase their bio a bit, feels like twilight, halfway between the light and the dark, a place where day is over and the night looms before you, but sometimes the best things happen after dark. The album has a consistent tone and mood without lapsing into repetition; there are several interesting and related, though distinct ideas floated by the band, but it plays best from start to finish as an album (while still providing a couple of great stand alone singles). This album also turns out to be one the most pleasant surprises I have encountered this year.