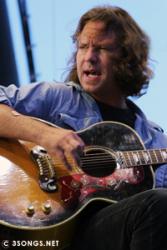 Generally speaking I'm not one for huge concerts. I feel much more at home seeing bands play in cramped showrooms filled to overflowing by only a few hundred people. But a select few bands can get me to push aside this personal rule of thumb and venture out into big-show-land. And Pearl Jam is most definitely of such caliber. That said, when the chance arose to see Pearl Jam and write about it for all you lovely TIG readers, my answer was an unhesitating yes.

Exhausted from a week of moving into a new house, I decided that driving myself to the Gorge was not the best plan. Instead, on my brother's suggestion, I joined him and seven mutual friends for a madcap RV escapade. I know what you're thinking — yours truly in an RV? I, too, was skeptical. Large means of conveyance are not exactly my cup of tea. But if you're going to a show at the Gorge, what better than an RV camping adventure to round out the experience? Besides, provided that you're not driving or riding shotgun, adult beverages are okay en route. (Who knew?) With this info — and an adult beverage — in hand, I settled in for a lengthy albeit hilarious trip across the Cascades.

Traffic afflicted all showgoers — the RV was not immune. Many people arrived late for the show, miscalculating the time it takes to drive that last seven miles from I-90 to the amphitheatre parking lot. Despite this fact, most ticketholders remained in high spirits, eyes bright with expectancy as they made their way toward the amphitheatre. We clambered out of the RV just in time to catch the last two songs of Pearl Jam's acoustic set. Walking into such a gorgeous space listening to Eddie Vedder singing "Black" greatly compensated for the long drive and for our dismay at missing the beginning of the show. At that moment, with the sky edging near sunset and thousands upon thousands of people experiencing the very same song, I felt quite glad I'd made the trip out.

After a brief intermission of sorts, the band took the stage once again for an electric set. Even at this point, people were still just arriving — a point not lost on Pearl Jam. This is quite a long way to ask your friends to come to see you play,Vedder remarked halfway into the second set, so we're going to play for a long time. Which is precisely what they proceeded to do, playing a complete second set and three separate encores, much to the delight of all 20,000 of us.

The reason I enjoy seeing Pearl Jam play even in such a large venue is that fact that somehow, by some Harry Potter-esque magic, their shows always feel startlingly intimate. It's almost as though each show transpired just for the enjoyment of you and yours. The fact that you're surrounded by more people than you've ever seen in one place before becomes inconsequential. Achieving this degree of intimacy on such a vast scale is not an easy endeavor. Pearl Jam's knack for doing so stems from the band's almost intuitive connection not only with one another but also with the crowd itself. This harmony between band and fans secures a camaraderie of sorts, a distinct sense that, for one exquisite evening, we're all in it together.

The band played the entire show with obvious delight, and showgoers responded in kind. The set list spanned Pearl Jam's fourteen-year career, drawing tracks from their first album Ten, their 2003 rarities collection Lost Dogs, and everything in between. I must admit I felt a thrill when they played "State of Love and Trust," a favorite from when I first started getting into music.

Vedder's serrated vocals filled the Gorge on "Blood" and "Last Exit," matching the ardent intensity of bandmates McCready, Gossard, Ament, and Cameron measure for measure. The bluesy crescendo of Mother Love Bone's "Crown of Thorns" paid sincere homage to a band Seattle lost all too soon while Tom Petty's "Won't Back Down" — dedicated to Cindy Sheehan — was heartfelt and poignant, a fitting tribute to Sheehan's steadfast resolve and continued anti-war activism.

After the last strains of The Who's "Baba O'Riley" dispersed into the crisp dark, we slowly edged out of the amphitheatre, smiling contentedly as we began the search for the RV. But that, and the rest of the night, is a story for another time.

{Wondering just what the show was like? You can download your own copy of the show at bootlegs.pearljam.com. The Gorge show marked the kick-off of this new innovation, designed to get more music out to Pearl Jam fans. Concerts will be available for digital download just hours after the music stops. And with upcoming tour dates all over Canada and South America, you can assuredly get your Pearl Jam fix for months to come.}