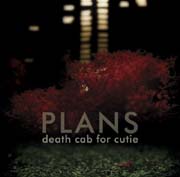 There are two obligatory remarks made in every recent Death Cab for Cutie article, and I think we all know there have been a lot of articles. Don't you get swelled with hometown pride to see Death Cab on the cover of SPIN? That's like the Longshoreman's Daughter being on the cover of Cooks Illustrated.

Remark #1: Death Cab for Cutie has been, and will no doubt continue to be this season, mentioned consistently alongside Michael Chabon on a television series called The O.C.

Remark #2: The name of their new album, out now on Atlantic Records is Plans, which opens the door to an incredible gamut of opportunities to employ fantastic puns as the titles of articles: "Death Cab is making Plans," "Big Plans," "Plans for Success," etc.

Like many Seattle-ites, I've known and loved Death Cab for some time. I, like many, remember the first time I heard "Prove My Hypotheses" (a Death Cab staple from the archives) and the way it seemed like I had something of my own to listen to outside of the requisite Dave Matthews of my friends.

So despite the two obligatory remarks above — which, quite frankly, have been getting on my nerves — I still read voraciously anything I can find regarding Ben, Chris, Nick and Jason. They are a fantastic band, one that NPR called the best indie band in the world, with fantastic records to boot, so that the jump to the major label was not unexpected (and hopefully we all will continue to keep Barsuk afloat in financial stability by purchasing as much Nada Surf and Vanderslice as we can.)

The anticipated major label debut, Plans, is simply (thankfully) best described as, "another Death Cab record." The record opens with a very safe, very Death Cab track, "Marching Bands of Manhattan." A slow organ chord gives way to crashing drums and Ben's high-tenored refrain, "Sorrow drips into your heart through a pin hole / Just like a faucet that leaks, and there is comfort in the sound… Your love is gonna drown." Oh Ben, oh Ben.

Then it gives way to lead single, "Soul Meets Body." The song pushes Gibbard to the top of his range, but it seems to lack the lyrical knot to hold everything together. "When soul meets body," sang over and over, just doesn't work hard enough.

Alas, also not-quite-there is "Different Names for the Same Thing," Plans's version of Transatlantism's "We Looked Like Giants," in terms of the long, Chris Walla's Musical Playground, outro. It's nice, but seems to still be searching for something solid to stand on.

Much of the record is this way — competent, but seemingly not complete. Death Cab seem to be searching for their next move. Not unlike The Photo Album — which served as an enjoyable stepping stone midway between 2000's We Have the Facts and We're Voting Yes (in the minds of many, the band's best record) and Transatlanticism's — Plans may be a transitional record between Transatlanticism's breakout lush emotionality and whatever the band has in store for us next time.

Plans lets Death Cab relax for a bit. Despite the title and it supposedly being about the futility of making plans in life, it's open-ended, and lacks a definitive theme. There's a lot of talk about death — but also a lot talk about water. The record might be about drowning, or surfing.

All in all, it is a good record, but my no means the greatness of which Death Cab is capable. Although "Brothers on a Hotel Bed" is one classy track.