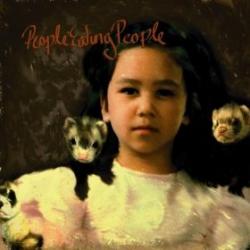 I joined in the wailing when Mon Frere went down in 2007. Leader Nouela Johnson had such potential, her way-out style and insouciant songs wouldn’t just stop there, would they? It seemed very James Marilyn Dean Monroe, a fickle flash-burn of utter musical sweetness gone before the world could be convinced. Then Johnson went on to play keyboards with Say Hi and other bands, and it seemed our frantic farewell may have been rightfully certain.

Now, like your most tender enemy and worst friend calling in the middle of the night, Johnson is back in Seattle, using her sly and swaggering voice to bob and spin over sauntering piano bomp in the self-titled People Eating People. Mark Gajadhar from Past Lives, the Blood Brothers and Champagne Champagne has helped her construct a delightful soundtrack for a dimly seductive grotto at the edge of night. Joined by members of Sirens Sister (Ben Libay) and Black Houses (Christiaan Morris), People Eating People seems like a very healthy project for a band title about cannibalism and a collection of kill-cabaret songs that nakedly studies psychic vampirism and dysfunctional trysts.

Johnson’s fingers are light on the keys, and the others don’t add anything obtrusive, so the focus is in the stories swaggered out. “All the hospitals are closed tonight,” she pines on the second track, “take all those pills, fake all our pain.” On “I Hate All My Friends” Johnson clenches her fists and chokes out, “All they ever do is take from me, lie through their teeth.” She scrambles all over the piano helplessly till she blurts, “You made me angry, you made me mean.” She isn’t self-deluded by her own role in the destruction though. Halfway past the mid-point of PEP she boldly confesses “I’m evil, I don’t need a supernatural trip, demons or holy ghosts … I can fuck things up myself.” In a haunting Peggy Lee-style torcher, she throws it all to the bins and finishes the album with “I’m nobody special, you’re nobody special, let’s rage” (“Let’s Rage”).

This is crushed velvet, chain-smoking, sour girl music, still pretty as a punch from hell, but the damp-peeled absinthe labels didn’t take away the scraping of her ego even if they gave the burgundy-painted nails something to do for awhile. People Eating People is a great way for Nouela Johnson to start a new flame, and for us to rekindle one we thought went out on us.