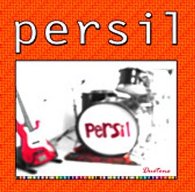 Because Persil's latest release Duotone is so breathtakingly great, I have broken an imaginary commandment I set for myself at the outset of the site: thou shalt not write album reviews.

You see, unlike live show reviews, which capture a moment in time, album reviews capture a fixed entity — a recording of music — something non-ethereal, something tangible. Oftimes, my initial reactions to recorded music are likewise fleeting; a vocal that initially irritates comes to delight {see stellastarr*}, guitar riffs that once seem catchy grow simplistic over time {see Journey, and okay that was a long time ago…}. In fact, I've never written a CD review before, unless you count the time back in 1988 when I reviewed INXS's "Kick" for my school newspaper. Please say that doesn't count.

Persil is that incredibly, fantastically good: they inspire one to break vows and conquer fears. And they're from Amsterdam, one of my favorite places in the whole world. They sent a CD to TIG via international mail and it's unquestionably my favorite CD of the year so far. Basically, I feel like I have a secret — and there's nothing I'd like better than share my secret with all my imaginary friends…

{imaginary aside: I have no idea how igLiz wasn't aware of Persil, what with her all-things-Gedge fascination.}

For you see, just because we Americans don't know Persil, doesn't mean they aren't kinda famous on the other side of the water. They've collaborated with members of the Wedding Present, they've appeared on the John Peel Sessions, and they've been reviewed in sources as diverse as Do Something Pretty, Splendid Magazine, NME, and a bunch of other publications I can't translate.

In Persil I heard diverse influences equal parts Land of the Loops, Lush, and Metro-era Berlin; they're a bit more obtuse than Saint Etienne, a smidge more popped than Stereolab, with dashes of frites with mayo.

You might have to buck up the extra pounds to order this gem of an album from overseas, but once you do, I dare you not to be enchanted with their airy yet ample vocals and intricate whirls of electronics. I dare ya! You can listen online at their website, or for the love of all that is Dutch, just go order the CD now from amazon.co.uk.

I am now adding "See Persil live" to my list of imaginary goals, right between having soy lattes with Johns Flansberg and Linnell and playing Scrabble with Stephin Merritt.