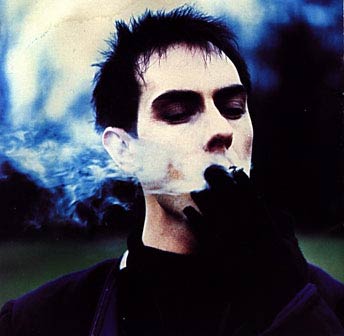 Andrew Boe March 11, 2011 no Comments
Two years ago, in early June, Peter Murphy had a show scheduled at El Corazon in Seattle. I was looking forward to the concert, but it was one of those rare Seattle days where the temperature was in the 90s. I remember sitting at home on the sofa with my girlfriend thinking that I was way too miserable to stand cramped in a boiling hot club and we eventually bailed on the concert.
Of the show, I heard that he previewed some new songs from a forthcoming LP, which were said to be heavier than anything that he had done in years. Well, Monday night, March 7th, Murphy was back in town for the first show of a US tour and the previously mentioned album, now titled Ninth, is set to be released on June 7.
The highlight of the evening may very well have been the first song, “Low Room,” a mysteriously dark song from 1992’s Holy Smoke. This version was a little bit heavier and slightly less jangly, but did not disappoint – as I have always wanted to hear the track performed live. I am not sure what musicians comprised Murphy’s band except for the always impressive Mark Twaite (The Mission, Tricky, Gary Numan, Peter Murphy) on lead guitar. Rounding out the group were a bassist, second guitarist, and drummer.
Four new songs were played and they lived up to their reputation, being generally harder rocking. At one point, an old friend of mine said that one of them sounded like the Stone Temple Pilots with Murphy on vocals. I was fightfully taken back by that suggestion, but I suppose that this statement hints at the overall direction that the new material has taken. There is certainly a grungier element to the sound. To complement this stylistic leap, Murphy performed “Disappearing,” from 1995’s Cascade a few songs into the set. Of all of the songs on the setlist, this one came closest in sound to the new tracks. From the same record, he also played “Subway,” a much more atmospheric track that added some variety to the setlist. Towards the end of the song, he even added some lyrics from “Oh! You Pretty Things,” by David Bowie.
Several Bauhaus songs were also included in the set to the crowd’s rapturous satisfaction. “Silent Hedges” was dusted off in good order, as was one of the former group’s sacriligous best, “Stigmata Martyr,” which featured the ultra rare sight of Peter Murphy on electric guitar. The group also brought out “Too Much 21st Century,” from the often maligned, but underrated Go Away White reunion album. However, the other standout of the evening for me was “Burning From the Inside.” Murphy’s backing band had the mood of this one down better than the other Bauhaus selections. The extended garage funk opus was performed magnificently.
Late in the main set, Murphy stated a few times that his throat was sore. One would have never known, as his voice sounded in great form. The band cooled down a bit for the encores as Murphy came out in a black t-shirt and fedora hat. The first of which began with “A Strange Kind of Love,” from the classic Deep (1990) record. During this one, he threw in some lyrics from the Bauhaus epic “Bela Lugosi’s Dead.” Surprisingly, it went hand in hand with the others, making for a welcome addition. The ever beautiful “Marlene Dietrich’s Favourite Poem,” from the same record was also sung emotionally by Murphy, striking a chord with the near silent audience.
Peter Murphy may be getting up there in age and will likely never reach the greatness of Bauhaus or some of his best solo material again, but the fire continues to smolder inside of him and his unmistakable voice is not showing any signs of fatigue.
Setlist:
Low Room
(new song)
(new song)
Disappearing
Silent Hedges
Burning from the Inside
I’ll Fall with Your Knife
Subway
(new song)
Deep Ocean, Vast Sea
Stigmata Martyr
Too Much 21st Century
(new song)
—————
A Strange Kind of Love
Marlene Dietrich’s Favourite Poem
Indigo Eyes
—————
Cuts You Up
Transmission (Joy Division cover)