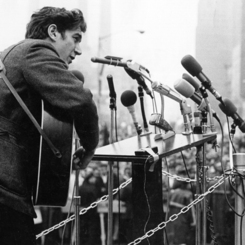 Phil Ochs: Why Neil Young, Ben Barnett & other great musicians love him (& why you should see his doc at NWFF!)

Phil Ochs was a protest singer in the early 60s folk scene that also spawned Bob Dylan, Joan Baez, and others. But I rarely listen to his early stuff; even though it enervates with left-wing patriotic spirit and lacerates society’s bullies (the anti-union wealthy, racists, religious bigots) with vicious satire.

This opening segment of the new music movie playing at the NWFF, There But For Fortune (screening Friday, March 11-13) does an inspiring job of getting you involved at the beginning of his career. These were the years Ochs hung out with Stephin Merritt’s heroine, art-pop chanteuse Judy Henske; sparred conversationally and artistically with Dylan over the meaning of politics and aesthetics; partied in his NYC apartment with those two and everyone from writers to activists to those in the middle like The Fugs’ Ed Sanders (if you think you’re a punk and that doesn’t ring any bells, take back your Green Day CDs to Everyday Music, kiddo).

Ochs was singing songs like “Here’s To The State of Mississippi,” in which he threatens to beat down the state personally for flagrantly murdering blacks and white civil rights activists; “Love Me I’m A Liberal” where he makes fun of weak-bellied Democrats for fearing Malcolm X; and “Cops Of The World,” the folk song equivalent of throwing water balloons full of piss at the riot troops in downtown Seattle during the WTO riots (though it’s more about Vietnam than cop-riling).

No, the reason you (I’m looking at you, kid) need to get your skinny jean ass out to see a movie about a protest folk-singer is primarily because of the amazing musical artwork he made in the midst of personal trauma and feelings of national political treason. If you remember how shitty we all felt after W. stole the election, and how the GOP piggies used 9/11 to drum up dummy-headed “patriotism,” and wondered if it would ever be useful again to protest: Ochs felt the same way about civil rights and Vietnam and the unfairness of the world and did everything he could to kick against the pricks

Ochs dealt with those feelings of despair too and turned it into bitter, biting, but ultimately hopeful music. Expansive, full cinema songs supported by brilliant producer/musicians like Van Dyke Parks and Joe Boyd — which have been huge inspirations to artists as diverse and recent as Billy Bragg, They Might Be Giants, Joe Strummer (who used to go by the tag “Woody,” the Guthrie of which hung out with Ochs and his clan), mother goddess of all folk-punk riot grrrls Phranc, but especially Neil Young and Ben Barnett.

If you’re a real Young fan then you probably really love his 1973 album On The Beach, which has the same anti-blood for oil topical messages and melancholy, apocalyptic imagery that runs through Ochs’ albums from the late 60s/early 70s. You can still hear Ochs in the lyrics of “Thrasher” from Rust Never Sleeps, but mostly in the voice; that voice — and the fact that both adored singers like Hank Williams, Faron Young, and other sweet-crooning country warblers with hearts like rattlesnakes on pins. As for Barnett, he did an entire lengthy EP of forlorn early Ochs songs, a couple albums before busting up Kind Of Like Spitting. Also, ask Damien and Dave Bazan and Rocky Votolato bout Ochs. Go on, ask them.

Ochs isn’t for your parents: He’s for you, just like Tim Buckley, or The Clash, or Dylan, or Crass, or The Mekons, or Parenthetical Girls, or The Slits, or whatever great folk-swooning-cum-punk-spirited muse-filled anti-authoritarian artist juiced you up when you first fell in love with rock as rebellion, Ochs had more in common with John Belushi’s Bluto smashing the acoustic guitar against the wall of a frat house in Animal House than the preppie playing it to impress someone with a corny 50s folk song. You’re going to need to get past the first hour of counter-cultural history; but I think you can handle it. Then we’ll talk about what records of Phil Ochs you need to start buying (the two-for in the link at the top is a great place to start).