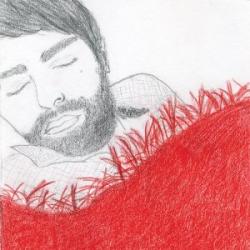 I go to great lengths to defend Peter Bjorn and John's 2006 effort Writer's Block whenever anybody tries to write off the entire thing just because they're sick of hearing that "Young Folks" whistle we've all come to love/hate. And as such, I'm really disappointed to say I wasn't impressed with Peter Moren's solo debut, a slew of quiet, folkie tunes that just never seems to get off the ground.

Though it's always admirable for a musician to want to branch off and create something entirely different (hey, it worked for Jenny Lewis and Albert Hammond, Jr.), The Last Tycoon makes me wonder who's really behind PB&J's awesome songwriting. I don't mean to unfairly compare the music of both projects; one is indeed poppier while the other is straight-ahead folk. But Moren seems to have forgotten to pack any of his pop sensibilities before he left the house, and the songs come out just sounding dull. I’m not sure what it is exactly, but something about Moren’s voice isn’t complementary to this stripped-down acoustic guitar sound.

One of the only tracks that’s found itself towards the top of my Recently Played list is album opener “Reel To Real,” one of the only times when the vocals do fit the music and the lyrics are slightly funny and interesting enough: “you seem to be terrified/cause you don’t know what to make out of someone/like me/it’s not just my bank account/there are several parts that doesn’t fit your scene.” About a minute into the song, the handclaps and drums seamlessly enter, while the acoustic guitar melody continues. At the song’s climax, the bells add a haunting layer while Moren sings “who wants to be real/nobody I know,” and the crushed synthesizer lingers in the background, just barely settled underneath the remaining instruments. 3 minutes and 13 seconds pass before the song ends, and Moren has taken us on a nice little jaunt that I wouldn’t mind repeating.

Halfway through the album comes “My Match,” a sweet, sparse song that relies on reverbed electric guitar, giving the whole thing a hollow yet comforting feeling that sounds like Moren reading his diary out loud to a small room of listeners.

The remaining 9 tracks are not bad songs, per se, but they are static rather than energetic and tend to follow one line throughout. Admittedly, if you’re in the right mood these songs will stick – if you’re sitting alone with a glass of vodka in one hand and your heart in the other, ready for a long night of self-reflection.