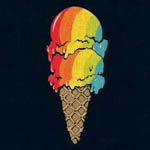 Let me explain. Imagine yourself driving. Specifically, driving between Corvallis and Salem, Oregon on Highway 99, a nice little two lane "highway." Now imagine you're in a hurry to get to Salem, it's late summer, and your car's A/C has decided to give up the ghost. Got it? Really, it's only a twenty minute drive on most days, but, ah! This is not most days. Instead, you have three pieces of large farm equipment that has no right to be driving on the highway in front of you. For miles. And miles. And all you have to listen to is Good Health by Pretty Girls Make Graves. It might have just been the perfect situation for their debut album: angry, hot, sweaty and in a hurry. Needless to say, the newest from Pretty Girls Make Graves has, thus far, not been juxtaposed with farm equipment in my life, but Élan Vital is the most experimental album from the Seattle band.

Pretty Girls Make Graves lost their original guitarist (Nathan Thelen) before recording Élan Vital and replaced him with a keyboardist (Leona Marrs) and the transition is evident: much more subdued songs and less guitar-driven mayhem. So, if you're hoping to damn some poor Oregon farmers to high heaven, this album is not the one for such activities. In fact, Élan Vital moves Pretty Girls Make Graves more into Yeah Yeah Yeahs territory and shares more with their namesake band (The Smiths) than anything they're put out. The album opens with the surprising uninteresting "The Nocturnal House" (which was also the first single) and it might be the most straight down the barrel PGMG song on the album, with Andrea Zollo's vocals echoing through the wall-to-wall distortion and shouted chorus. On the surface, it seems good enough, but when compared to the greater diversity of Élan Vital, each subsequent listen is unsatisfying. Even the other more "classic" PGMG-sounding songs, "Wildcat" and "The Magic Hour" has more life than the opener.

When Élan Vital really excels is when PGMG does something completely out of leftfield. "Pyrite Pedestal" has more of a Palomar/New Pornographers feel — heck, you could almost say it has a fun-loving sound. This indie pop-rock sound is expanded even further on "Parade," the standout on Élan Vital, a song that could easily be mistaken for a lost Rilo Kiley track. It has such a carefree energy that you never knew existed in PGMG and you can almost hope that they stay cheery for quite some time. "Parade" also emphasizes the strides Andrea has made with her vocals that no longer seem like shouted lines but purposeful singing. She has never sounded so much like a singer than she does on Élan Vital

This cheerful does not last, however, but the experimentation does. "Domino" has a White Stripes vibe with pounded piano and slowly evolves into a dance-rock beat like the Rapture with an eerie organ line twisting through the background. In what could only be described as the Yeah Yeah Yeahs meet Gogol Bordello, "Selling the Wind" with chanting and eastern European instrumentation over the main melody. "Pictures of a Night Scene" seems to take a cue from Tubular Bells (or all things) and begins with male vocals. It slowly boils into a frenzy with frantic piano and hushed vocals building. The increased reliance to have the piano/keyboard to drive the songs is evident on "The Number" where a piano line maintains the anxious tempo and mood of the song.

Élan Vital shows how much Pretty Girls Make Graves has grown as a band. They are now beginning to expand their sound out of the dirty, punk rock roots that they were spawned. Sure, there are some growing pains: the album feels a bit like a collection of songs rather than a cohesive album, but this flaw is overcome by the variety presented and the new avenues explored. It will be interesting to see where Pretty Girls Make Graves head after this album. They've spawned their own offspring in Seattle (see Mon Frere) and are one of the flag-bearers for the re-emerging Seattle indie scene. Well, at least now I might able to associate the band with something beyond farm equipment (note: yes, I must be from the Northeast, where we (a) drive like maniacs and (b) have no farm equipment on major roads. This leads to (c) impatience in regards to farm equipment on such thorofares. Can someone explain this to me? Forty cars waiting behind these behemoths. Come on now? Ah well. That's your surly New England moment for the week. Enjoy!)