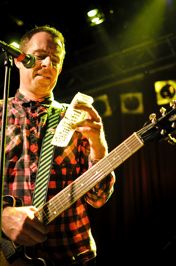 Photo Review: Ted Leo + Rx at Neumos with The Hive Dwellers and The Sea Navy

For years I have followed Ted Leo’s music. I was fanatic for a while, even. Then it came to the point where one of his songs would pop up on my iPod and it would be a pleasant reminder of why I love him so. Friday night was that reminder times a million and then some. Oddly enough, it was my first time seeing him. Neumos started out a bit empty, but upbeat local band, The Sea Navy, came out and got everyone dancing as more people filtered in. The Hive Dwellers (fronted by K Records head Calvin Johnson) followed up The Sea Navy with a set that defied the laws of most Neumos shows by not using one microphone or any fancy lighting. I can do no justice in describing what happened, you really had to be there. I’ll just mention that there was a lot of hip-gyrating. A lot of it.

Soon enough, Neumos was jam-packed with die-hard indie rock fans, buzzing excitedly about their love of Ted Leo. It seems he has quite a cult following and it’s really not hard to see why. Ted Leo is a great indie-rock god to believe in, a force to be reckoned with, really (but likely the nicest force you will ever encounter). I will definitely be seeing him any time he is back in the area because, I don’t know about you, but I really like to get my face rocked off. …Also, covering Bruce Springsteen’s “Dancing in the Dark” is one of the keys to my heart.