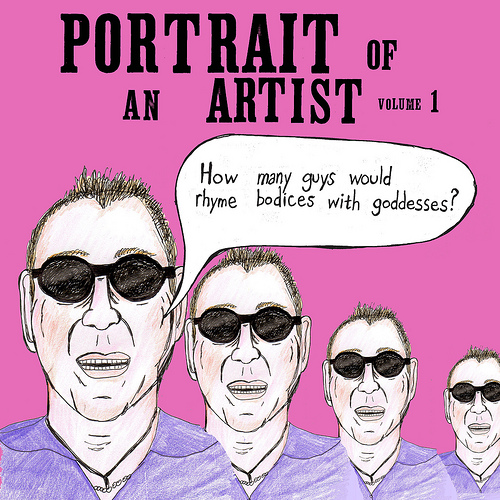 This is the second part of the first installment of Portrait of an Artist.  D. Crane will interview musicians and artists who blow his mind.  Read along and see him sharpen his interview skills to that of a slightly sharp pencil.  Fred Schneider was the inspiration for the song “(do the) Magic Centipede,” off of BOAT’s  Setting the Paces LP.  His new band is called the Superions.  They make the most ridiculous surreal/silly dance music around. Read part 1 here.

Fred,  here is my attempt to ask you some clever/wacky/personal questions.  The level of cleverness/wackiness/personal-ness seems more minute now that I know that you appeared on Howard Stern, last week!  But here I go anyway!

Assuming you go to Totally Nude Island, what piece of clothing would you miss the most?

My wallet!  To buy all the fabulous things at the gift shop!

Are you vegetarian?  How long?

Since ’72.  A friend talked me into it after I dropped out of college.  I never liked fish anyway!

Where should I eat when I visit Athens for the Popfest?

In Athens there is a great vegetarian restaurant called the Grit, and a lot of other places that are really vegetarian friendly.

What happened with the ham in the video?

We bought the ham and were gonna donate it, but it fell on the floor during the video.

Do you like the song “Monster Mash”?  It’s maybe my favorite song of all time.

Yes!  I love everything Halloween.  I love old school Halloween.

Talk singing.  When I started I am just singing as I go along.  If you listen closely there is hesitancy.  It is not for dramatic effect.  I’m trying to think of what to say next.

I just got a dog and am totally obsessed.  Do you yourself own a dog?

I am out of town too much. I sure as hell don’t want to pick up the poop.  If I did though I would get an Alfen Pinscher which is kind of like a Belgian Griffon.  A wiry little devil dog is what I would have.

I stopped eating bagels because they are so carb heavy.  Give me a sprouted whole grain English muffin.

That absolutely ruins my next question about which detective you would want to spend the day walking New York City with. (Fred lives in NYC)

My life also revolves around pizza.  What is your favorite pizza topping?

You know what just give me a Pizza Margherita with extra basil.

My wife wants to know….Project Runway or America’s Next Top Model?

Rupaul’s Drag Race (Rupaul is a good friend of Fred’s.)

You are well known for playing cowbell?  Did the Will Ferrell “More Cowbell” skit Do you think of that skit every time you play the cowbell now?

I have been playing cowbell since ’77, maybe he thought of me. (sounds offended)

Do you have any favorite places in Seattle?

I love the market.  There is a great used record store up on the hill.  I love eating all the ethnic foods too.  Unfortunately, they’re full of carbs.  Why do carbs have to taste so good?

If you weren’t making music, what would you do?

I don’t know, I have no skills!