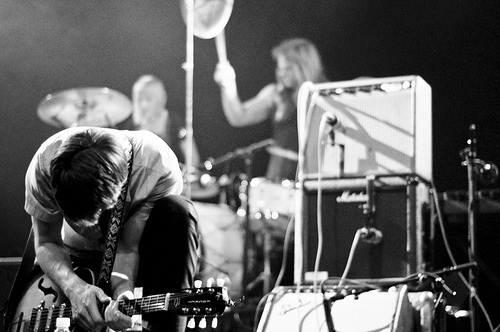 Photoessay: A night to remember with Shearwater at the Triple Door

imaginary victoria May 4, 2010 no Comments

Between the sweet and straight-out bite of Hospital Ships, the huge-guitar shred of Wye Oak, and the general everythingness of Shearwater — I’m surprised that anyone left the Triple Door last Thursday night with any face left. The show was absolutely amazing, and easily makes my top five sets of the year so far. Without an instant of doubt.

The two openers, Hospital Ships and Wye Oak, were perfectly laid out as warm-up and direct support on the night’s bill. There are plenty of bands that can (and do) sound fine next to each other, of course — but when someone has put together a thoughtful lineup like this, the vibe of the night really translates. Hospital Ships’ set was laden with sharp, smart lyrics and lovely, happy-to-melancholy chord changes that took us from “Aw!” to “Holy crap. YES.” and back in a single song. Wye Oak, in contrast, stayed more on the angst-sound side, blowing us out of the front row with a gigantic sound that seemed much bigger than two people could possibly produce.

And of course, there was Shearwater… *sigh. Larger-than-life, I-can’t-believe-I-forgot-my-earplugs, epic-doesn’t-even-come-close-to-describing-it Shearwater. Playing for almost a solid ninety minutes, Jonathan Meiburg & Co. took us through a perfect cross-section of their catalog, most notably with an unreal rendition of “White Waves” about four songs into the set to lay down the tone for the evening. Song after song, line after line, they just brought the amazing over and over again — leaving us spent, thrilled, and practically faceless. Lest we think we dreamed all the awesome, here’s some shots to prove it all happened:

{So amazing! But that’s not all — be sure to check out the imaginary flickr pool for more shots from the show!}