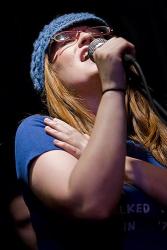 New York native Ingrid Michaelson heated up a chilly Seattle evening, as she played an acoustic in-store set at Easy Street Records followed by a sold-out show at Neumo's last Monday. She first garnered national attention a couple years ago when her songs were featured on the popular TV series "Grey's Anatomy." Since then, her single "The Way I Am" was featured on the Old Navy Fall 2007 advertising campaign and she has recently been on tours with Dave Matthews Band and Jason Mraz.

Michaelson was joined by band mates Bess Rogers (guitar), Allie Moss (guitar), Elliot Jacobson (drums), and Chris Kuffner (bass) for the in-store performance, much to the surprise of even Easy Street Records owner, Matt Vaughan. The six-song acoustic set was followed by a signing and meet & greet with Ingrid. A webcast of the set can be found on the Easy Street Records site.

British singer-songwriter David Ford started the Neumo's show off in style, as he put his looping skills and passionate vocals on display.

Fellow Brit Newton Faulkner followed with his unique guitar playing style (which consists of rhythmic tapping and unusual plucking patterns accompanied by organ pedals) and closed his set with an amazing rendition of Queen's "Bohemian Rhapsody."

Ingrid Michaelson took the stage shortly before 10 PM with her band and immediately connected with the sold out Neumo's crowd. Her set consisted of a mix of songs from her debut album Boys and Girls and her new one, Be OK. She kept the audience entertained in between, including a hilarious Sarah Palin impression and jokingly played a song request in exchange for an audience member. The melodies and harmonies on songs such as "The Chain" showcased the simplistic yet powerfully emotional and seemingly effortless vocals which have rocketed Michaelson to the top of the charts.

Ingrid Michaelson will be back in town on Saturday, December 13 at The Paramount as part of the The Mountain's Winter Warmth concert, featuring The Pretenders, Matt Nathanson, and Augustana. Her soothing voice will surely keep your ears warm from the Seattle cold.

Songs to check out:
David Ford: "Go To Hell", "Song For The Road"
Newton Faulkner: "Dream Catch Me", "People Should Smile More", Teardrop"
Ingrid Michaelson: "Be OK", "Breakable", "The Chain", "The Way I Am"

The rest of my photos from the Easy Street in-store and Neumo's show can be found here and here.