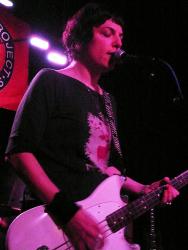 After a much too long week of work or school, made more unbearable by pouring rain and only grey skies, what more could a Seattleite ask for than an evening full of summer fun? I went to the VERA Project last Saturday looking for a break from the wintry monotony, and received not only some summer fun, but also peanut butter sandwiches and a healthy dosage of local pop too.

The first band up was a cute man and woman duo called Dimples. Their songs were built around drums, guitar, and their playfully blunt lyrics (“You’re being such a jerk!” being the chorus in one song).

I doubt that any song of theirs went over two minutes, and the high energy fun-filled delivery was reminiscent of a punk band (minus the anarchy and jean jackets). It was easy to tell Dimples enjoyed being on stage, and their playful banter with the small audience made the show fun, if short. compare them to some classic punk 45s. 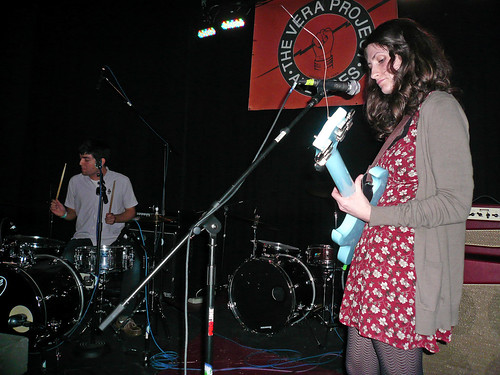 The next band was the delightful local pop band Iji (pronounced ee-hee) including several members of former Seattle greats Patience Please. This band was all kinds of adorable, not only in their music but their execution. Their show featured what band-member Keenan Dowers called “performance art.” With only four out of a total seven members at the show, three of them sat around a card table topped with a woolen blanket and various keyboards and percussion instruments, making peanut butter and honey sandwiches as the lead singer played the first song. Afterwards, they placed the bread and accoutrements on the very edge of the stage asking “Does anyone want a sandwich? Anybody hungry?” Some people were, and they partook. Their sound is certainly reminiscent of Patience Please (who I’ve seen several times and always thoroughly enjoyed), with inventive sounds using creative methods of playing (hitting tambourines with maracas, etc.) and instruments I’ve never seen before. The lyrics are sweet and earnest, and if all their shows are as cleverly engaging as this one was, I look forward to seeing Iji again.

All Girl Summer Fun Band hadn’t played in Seattle since 2003, which means quite simply that there has been no summer fun of the all girl variety in our city for five years. Not that we’ve been especially snubbed — AGSFB has been fairly inactive until this year, when they released their latest album “Looking Into It” and began touring again for the first time since 2005. Unfortunately it may have been a disappointing night for the girls: not only is the Crocodile Café still out of commission (where they played their last two Seattle shows), but the audience at VERA was not as numerous as it should have been (although there were a few very spirited attendees who may have made up for it). 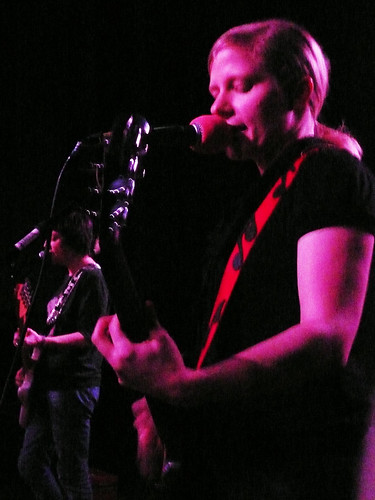 It’s easy to tell AGSFB are veteran musicians. Their enthusiasm was evident and although there was a dearth of inter-song banter, it was very easy to fall in love with this band. The girls’ coy smiles when interacting with the more vivacious (and vocal) fans thoroughly won me over. They can rock it like nobody's business, but they also seem like very grounded and sweet people. The set was mostly comprised of songs from their last two albums, and unfortunately had none from their self-titled LP released in 2001 (the only one I own).

The end of the set was a little anticlimactic; it felt like a very abrupt conclusion to such an energetic show. AGSFB quietly said goodnight and started packing up. However it was in keeping with what I can only assume to be their modus operandi: keep it real, don’t ham it up, play rockin’ music. That’s exactly what they did.

Videogame Heart
Not the One for Me
Tour Heart Throb
Plastic Toy Dream
Everything I Need
This Will Never End
Oh No
Dear Mr. & Mrs. Troublemaker
Trajectory
Grizzly Bear
Becky