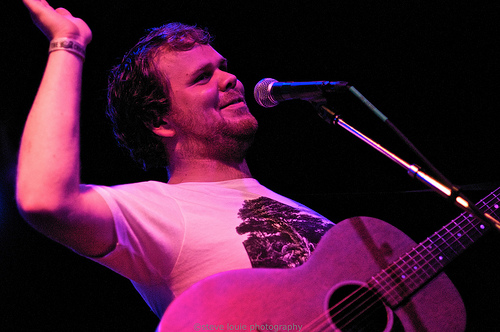 Grand Hallway is no stranger to the Seattle music scene having their album Yes is the Answer named as one of the top Northwest releases of 2007 on Three Imaginary’s Girls Editor’s picks. I received an inside tip to go the Crocodile early to catch them. I’m glad I did.

This eight piece orchestral group is fronted by Tomo Nakayama. They perform songs that can involve the entire band (various string arrangements, piano, accordion) or Tomo mostly himself singing quietly. You can hear both his soaring and hushed singing style on the song “Sirens”. If you youtube the song or go to their Myspace, Tomo and Chris perform this song in a restroom at the Lake Wenatchee State Park. The recording captured the reverb really good.

Other notable songs they played were “Seward Park” and “Blessed Be, Honey Bee”  (Grizzly bear’s and honey bees can be in love). Definitely a friendly organic nature feel to their songs and just a love of simple things.

For those that are already looking forward to this year’s summer festivals, they are scheduled to perform at Bumbershoot in September. 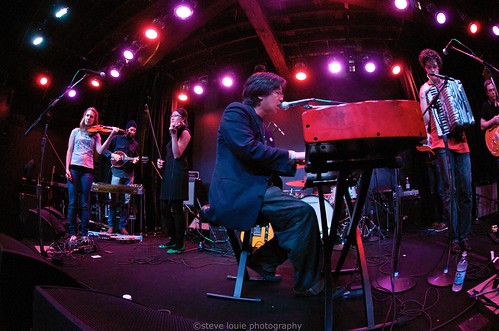 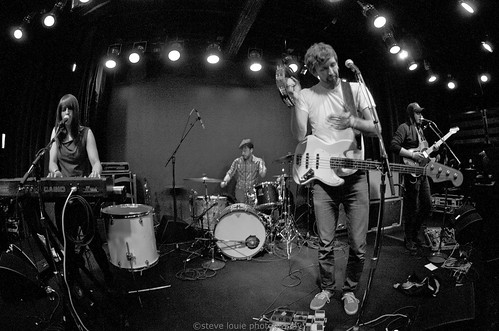 Headlights broke the “just-stand-there-not-even-close-to-the-stage” monotony in the crowd by telling them to come closer. The band was in jovial mood and while the crowd was inching their way closer, Erin called out “You guys put cream cheese on your hot dogs?!I Is it good?”

Apparently so judging by the crowd’s reaction. The band joked about a duck committing suicide on the front of their tour van. Or was it they killed the duck? Who knows. Headlights played last month at the Nectar Lounge so their new songs are still somewhat fresh in my mind.  This time around they played a good mix of the old and new and they sounded great. Really looking forward to their album coming out in August.

Loney, Dear. Gotta love the Swedish folk. They love to tell stories about their experiences on tour  in America. Lead singer Emil Svanängen recalls his day spent visiting the Sub Pop offices (and being very appreciative of them) and walking around memorizing the street names near the Crocodile.

Emil has this funny innocent way of leading the crowd to sing aloud (and sing softly), mostly the “na na na na la la la la” parts of his songs (ie on “And I Won’t Cause Anything At All”).

It was close to an hour and half set which was a real treat even though the encore was a little drawn out or pausing between songs and talking to his bandmates in Swedish.

The performance he gave was a good mix of pop songs that ebb and flow in tempo and mood. It’s definitey notable on songs on super high fast singing in “I am John”, the dance beats of “Airport Surrounding”  to the vocal harmonies of “Ignorant Boy”.