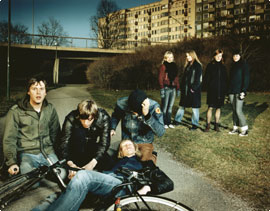 The Legends' return with Over and Over

I was all set to announce how I just found out about this great band from Sweden called The Legends, who have a great album forthcoming in June (6/16 is its US release date) and then while looking at the TIG archives, I realize that I'll actually be the third person here to write about The Legends, but it is deserved.

A review of a compilation The Legends appeared on called them "a sunnier Jesus and Mary Chain. Or an indie-rock Elton John, I don't know." I tend to think the former is more appropriate but my dear friend Imaginary Liz summed it up nicely when she exclaimed "…The Legends…who RULE!"

The Legends strike a nice balance between drowning in JAMC distortion (really heavy reverb and distortion) with soft, catchy harmonies. When a reviewer said they sound like what might happen "if My Bloody Valentine swallowed Peter, Bjorn and John", I thought it might just mean really high-pitched whistling, but fortunately that's not the case.

The Legends are led by Johan Angergård, who is also part of other Swedish bands Acid House Kings and Club 8. Over and Over is the bands first proper LP since 2004's Up Against The Legends. They did put out a handful of EPs since then.