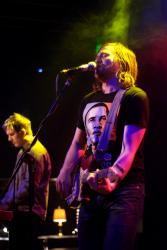 If I had to pick one photograph to sum up the Tapes 'n Tapes show at Neumo's on Tuesday, this would be the one. It's got all the same elements their set had — bright, contrasty, noisy; kind of blown out, in the middle of everything that's happening, screaming, big guitars, and even a little bit of Obama.

Really. Because everything's better with a little bit of Obama, isn't it?

So, between the inauguration of our 44th president and ChrisB's celebratory bash at Chop Suey, I fared the all-ages crowd for a great show at Neumo's. Tapes 'n Tapes, as stated, delivered a smack-down set of deliciousness, Wild Light impressed the crowd once they caught their own groove in the middle of the second slot, and local openers Fences did some perfectly unplugged-punk warmup.

All three bands, on top of sounding stellar, were super photogenic and full of energy — here's some of the highlights: