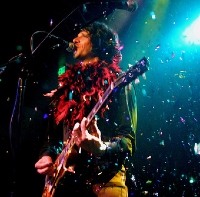 Photo Essay: The Ultimate Party Show – Head Like a Kite and Truckasauras at Neumos

Truckasauras is like no electronic group I've seen — they sound more like a really great rock band filtered through old techno equipment. In smaller venues, their songs' subtle nuances may be easier distinguished, but I prefer the chest-rattling thump that Neumos' sound system allows.

Stand near the stage and you’ll see Truckasauras constantly tweak and adjust endless buttons and dials, reaching over each other to perfect their sound, which to me on Saturday sounded perfect already. Their tight and driven set flowed easily and thumped mightily. Trent Moorman joined Truckasauras for their last song, adding drums and energy that made for a splashy end to a raucous set.

To some, Truckasauras shows don't visually match their output, but I find them fascinating musicians. The video that accompanies their live shows is entertaining and hysterical in its own right, but I stopped watching — I was distracted by the band.

To say Head Like a Kite had fun onstage Saturday night is an understatement, and their energy was infectious. Back home after a quick tour where they were filmed for upcoming episodes of On The Brink, they seemed more than ready to play to the Truckasauras-warmed audience that filled Neumos.

The stripped-down version of HLAK I saw just a few weeks ago in Portland was gone – Dave and Trent were joined onstage by Tilson of the Saturday Knights, Graig Markel, Zera Marvel, Sindi Sarah, a group of human-sized fuzzy creatures, a dancer or two, a few costumed videographers and an interesting fan with a yarn Eeyore-type tail hanging in his face. This much spectacle could easily overshadow the average band’s music or bog down the average show, but Head Like a Kite has the unusual ability to expand to fit any circumstance and remained the center of attention.

My favorite song of the night was "Letting It Go on The Ohio Turnpike" from There Is Loud Laughter Everywhere which was remixed live and buoyed by Tilson's slick vocals. Other gems included "Six Bags of Confetti" and "We Were So Entangled". HLAK shows are fast-paced and it was over far too soon.

Did I mention this show was free? Free shows tend to draw fun audiences anyway, but the lineup, which also included Slender Means, guaranteed a happy crowd. All this and the glitter confetti mother lode made for a celebration that any of us who attended will remember for weeks to come.