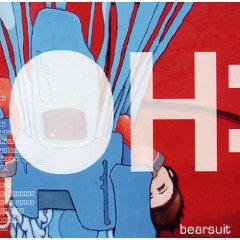 "Foxy Boxer," about midway through this carnival wreck of a happy collage-rock album, is the single and key track. Sweet mod girl vocals promising sultry controlled violence, Stereolab burblings as the UK band swings through a space cadet anthem of Pizzicato Five on Everclear martinis proportions, this album is quintessentially Happy Happy Birthday To Me (their U.S. label) and also perhaps one of the best things that Athens funhouse has ever released.

Since Siouxsie first took the stage with Sid Vicious on drums, there have always been these sort of all-talent no-skill art-yob experiments on and off Brit-punk stages, when fun can come back into the scene every so often, and it's all about make believe and thrift store clothes and everyone you know clapping hands and screeching on the chorus.

There really is no tag for the genre, it sometimes hides in Oi! rock as with Splodgenessabounds (DO check out), in death disco as Pop Will Kill Itself, sometimes gussies up and calls itself grebo a la Hayzee Fantayzee when it has a fashion sense.

Bearsuit distinguishes itself by drafting in waif-boy vocals from Scottish indie pop while keeping the Revenge of the New Wave Girlfriend female accompaniment, and then going total apeshit with noise-rock just when you've settled into the melodic side of the merry sing-a-longs.

I find the opening of this full-length a bit too much on the aggressive side, peaking with "Steven Fucking Spielberg," but starting with "Keep It Together Somehow" the cosmopolitan cacophony sorts itself out for an album-heartful of croony tunes not that far from Julian Cope or Divine Comedy's less elegant and more emotionally vulnerable moments. Even with all the timpani, detuned guitars, and cat out of breath dancing on the vintage keyboards, that's space rock I can forever float in.